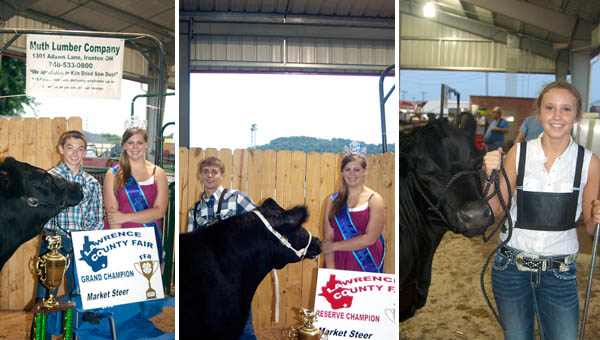 A steady rain fell and a cool breeze swept through the livestock arena Wednesday night as 4-Hers circled the ring with their bovine showpieces.

The evening was all about steers, first with the market show, followed by the showmenship competition.

The largest show animal at the Lawrence County Fair, steers are arguably one of the most difficult to raise, and sometime handle, as a couple youngsters learned when their animals bucked to make a getaway.

Judge Tim Schwab applauded all the participants’ efforts, but two stood out from the herd.

Both said it was their second year showing steers at the fair.

The Ironton native said he spent more time with his steer this year, keeping his coat clean, and working harder overall.

“They are hard to take care of,” Lambert said.

“I took care of him better, keeping him healthy,” Kouns said.

Kouns also thanked his uncle, Donny Craft, for helping him with this steer, saying “I couldn’t do it without him.”

Both Lambert and Kouns are poised to take big bucks at the large animal auction on Saturday. Both boys said they will save up their money.

Following the market show, the junior and senior 4-Hers returned to the arena to strut their stuff for the showmenship competition.

This time the judge was looking at how the young people handled their steers, their postures and professionalism.

Ann-Michal Dyer, 15, with the Scottown Farmers and Farmerettes, took top honors for her showmanship in the senior division.

Dyer, of South Point, said she has shown steers exclusively since she was about 8 years old.

“It’s my favorite thing to do,” she said.

But it’s not an easy task, the girl said.

“They are pretty much wild from the start,” Dyer said. “You have to break them in.”

She said it took right up until a few weeks before the fair to get her steer tame enough.

“It takes a lot of hard work,” she said. “You have to be out there everyday, hosing them off and walking them.”

And the junior showmenship award went to a competitor who already had a big victory for the evening — Noah Lambert.

“I was more surprised than when I got grand champion,” Lambert said. “There were a lot of great steers and great competitors.

Lambert said his steer was a rough one to break in when it was younger.

“But once I got it broke it last year,” he said, “It was easy to get back into the routine.”

Both Lambert and Dyer will return to the arena Friday for the Showman of Showmen contests, where they will have to show one of each animal.

Law enforcement believe a rash of burglaries in the county were allegedly the actions of two Kentucky residents. Starting in... read more