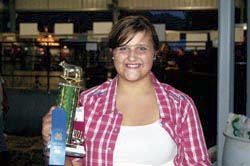 Morgan Klaiber won the showmanship honor in class three for the feeder calves.

Well before the cows actually entered the ring of the livestock arena and barn at the Lawrence County Fair the bovine parade announced it was on its way with a chorus of moos emanating from behind the packed bleachers.

For many of the youth showing off their handling skills and four types of cattle — beef breeding heifer, feeder heifer, feeder steer and dairy cattle — Thursday evening was either a night of multiple awards or a family affair.

Although he could have just been a little winded after showing animals in several categories, his family said Markie is a young man of few words most of the time anyway. 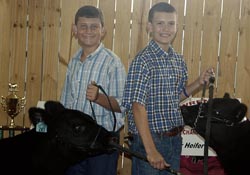 How did it feel to win? “It feels good,” he said. What’s the best part of the fair? “Just coming up and seeing everyone. Showing the animals.”

Mom, on the other hand, was a little more outspoken.

“I am very proud. Markie does a lot of hard work at the farm,” Renea Norris said. “It is a family thing. Me, his dad, his sister, his aunt, his uncle. We are in the barn everyday.”

For Ann-Michal, a member of the Scottown Farmers and Farmerettes, the dual awards were the payoff for lots of hard work. Although the teen said she was burning up afterwards, the judge apparently thought she was as cool as the other side of the pillow while showing Mayflower, a jet black cow.

“I don’t get nervous in the ring, but I am always nervous before,” she said. “Once I am in the ring, it all goes away.”

So, what is the secret to her success? Just hard work, Ann-Michal said.

But her competitive side might have something to do with it, too. 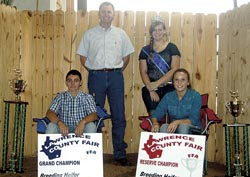 “I like the trophies’” she said with a laugh. “It sounds selfish but I like to win.”

Chad Morris is a 13-year-old member of the Starlite 4-H club — with nearly 60 members it is by far the largest of all the groups in the county — and won the junior showman trophy for beef breeding category.

Chad said he had no idea he would do that well, saying “it is always a mystery” and the best part is “showing your animals and having fun.”

His sister, Brenna Morris, a 16-year-old member of Starlite, won reserve champion in the feeder steer category as well as the showmanship honor in class one for the feeder calves. With eight years experience showing cows of one type or another, she said the process is almost reward unto itself. Almost.

“It just feels good wining because you have worked so hard,” she said. “It is about having fun and knowing that you worked with it and helped make him that good.”

Thirteen-year-old Noah Lambert said he got off to a rough start by not winning his class but that it made his win as the class two feeder calf showman that much more rewarding.

“My family has always been in the steer business,” the Starlite member said. Noah is at least the second generation as his father and uncles showed steer at the county fair in the 1960s. “It feels good that they are all here to see me, watch me show and grow into the family business.” 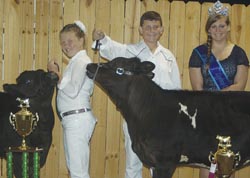 Morgan Klaiber won the showmanship honor in class three of the feeder calves. The 12-year-old member of Gingham and Denim 4-H club didn’t let being a rookie with feeder calves slow here down.

“It was hard. He is stubborn,” she said of her calf Oreo. “He kind of wore me out, but I am excited.”

Uriah Cade, 13, couldn’t hide his ear-to-ear smile when talking about his grand champion win in the feeder heifer category. Part of his excitement came from the fact his second cousin, Ethan Cade, was the reserve champion.

“It is great. There are no more words for it. Just great,” Uriah said about competing with his 12-year-old relative that lives just a half mile away. “I am just happy that I could share it with my cousin. He comes to my house. I go to his house. We watch them grow together.”

“It feels pretty good,” Ethan said. “We are good friends.”

Uriah’s family spirit might have taken a blow at the end of the night when, after a wardrobe change to don the traditional white shirts worn when showing dairy cattle, his younger sister edged him to win grand champion and junior showmanship honors in the category. Uriah earned reserve champion. 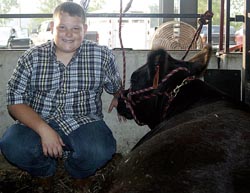 Did it make it sweeter for 11-year-old Kaylee Cade to beat her big bro? “Definitely,” she said with a huge smile.

Ironically, the siblings showed siblings of their own in dairy calf twins, Maggie and Molly.

“They are raised on our farm,” Kaylee said. “There is feeding, milking, watering, cleaning, walking, raising.”

“And who does most of that?” Uriah chimed in with a laugh.

Kaylee didn’t dignify the teasing with a response, but she may have held her trophies just a little higher as an answer to the sibling rivalry.

It was on that note that everyone headed back to the proverbial farm or out to pasture, so to speak, in anticipation of the fair’s culmination with of the showman of showmen competition and small animal auction Friday and the large animal sale that will help wrap up the 2013 event Saturday. 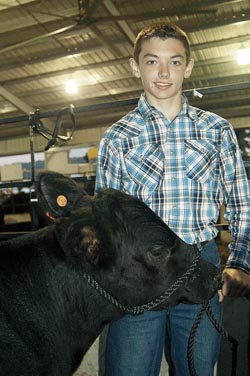 Like an athlete in competition, disciplined training was the secret of success for the two 4-Hers who took top honors... read more