Like an athlete in competition, disciplined training was the secret of success for the two 4-Hers who took top honors in the hog showmanship contest on Thursday morning. 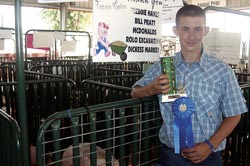 Travis Gates, 14, of Pedro, was named senior showman while Kara Saunders, 12, of Scottown, added another trophy to her collection as she took the junior showman award. Earlier in the week Saunders took reserve champion with one of her hogs.

The first of these swine constitutionals lasted 20 minutes. Then each day Travis would add a minute per session.

“It builds up stamina,” he said.

Pointing to some entries in a younger class class division, “Those are getting tired. See how they go to the gate,” he said.

As fair time nears, the hog gets bathed every other day in order to look its best for show time. 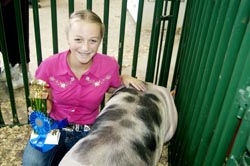 The cooler temperatures on Thursday seemed to bring the best out in the pigs, that trotted around the arena through an imaginary maze guided by the exhibitors. Judge Jamie May of New Holland, stood at one end of the arena, arms folded, eyes intently focused on the animals.

The 4-Hers took their lead sticks to make the animals turn left, then right, then straight ahead over the sawdust floor.

Next May came upon each class of animals, moving from one side of the animal to the other, checking to see if the exhibitors maintained their required position to the judge, a fundamental rule of showmanship.

Every so often May imparted some words of advice as the 4-Hers went through their paces.

“Don’t ever hit the animal in the hocks,” he said. “That is like hitting a person in the kneecap. Keep the stick on the front of the shoulders. This is not just for a grumpy old bald judge. I am very passionate about showing.”

Kara, who until this fair had spent her 4-H career showing lambs, said she was surprised about her victory.

“I didn’t think that I would,” she said after the competition as she accepted handshakes and high 5s from friends and family. “Pigs are a lot easier to show than lambs.”

Just before the last trophy was handed out, May applauded the young competitors.

“You can tell these hogs have been handled a lot,” the judge said. “We like to see kids who work hard and get it done. If they want to come out here, encourage them to do their absolute best.”

Ohio must be set for ‘rainy days’

Although not everyone will agree with his methods, it is hard to argue with Gov. John Kasich’s results when it... read more