4-Her student displays variety of talents 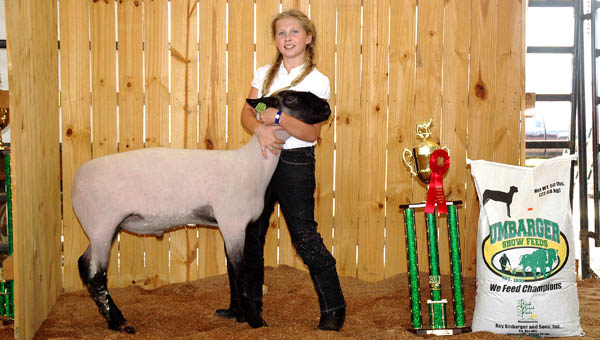 Willow Maynard holds one of her prize lambs.

PEDRO — With her blonde hair pulled back in French braids, 9-year-old Willow Maynard easily looks like the dance student she is during the school year.

But that fragility is deceptive as Willow’s most recent accomplishment attests.

This summer Willow added a new entry to her grade-school resume — winner of both the Grand Champion and Reserve Champion market lamb trophies at this year’s Lawrence County Junior 4-H Fair.

Willow has been involved with 4-H since she was in kindergarten but this year was the first time she took on an animal project.

So on March 22, Willow with her parents Joshua and Rachel Maynard, brought to their home in Pedro, Sam and Dean, 3-month-old lambs, she was hoping would become champions.

Starting at 6 every morning Willow and her father did laps up and down the driveway with the lambs to get the animals in shape.

“Sometimes we would jog,” Joshua Maynard said. “I was getting exercise. She was just getting dragged.”

Some days the father-daughter duo would work on teaching the lambs how to stand still by placing them on a grooming table.

“To see how long they would stand without moving their feet,” Willow said.

Instead of a clock, they measured time by the number of country music songs, the lambs would remain motionless to.

Soon July was upon them, and the babies Willow brought home with her in the winter were now almost twice her size. But the 73-pound girl was undaunted with the task of leading the 130-pound animals around, just by her hands. Sometimes it was easy and sometimes Sam and Dean had minds of their own.

“I’d feel like I was about to cry,” she said. “I was getting dragged. You have to hold on. It gets loose and it is hard to control it.”

On her fair competition day since both animals were in the same weight class, Willow only had to worry with showing one lamb. Another handler took care of the second entry. But when the victory was announced last week, it was Willow’s time to shine.

That she accomplished what she did at the fair is no surprise to Willow’s dance teacher, Yvonne DeKay, whose studio the girl has studied at since she was 2 years old.

“She is very, very gifted, but she doesn’t realize it,” DeKay said.

DeKay remembers the time she had a new computer that she was unable to work.

“No one in the studio knew what to do,” she said. “Willow said, ‘I can fix it.’ She sat down and started telling me what to do. She could show me everything on that computer. Now it’s if you don’t know what to do get Willow in here.”

This fall Willow will start fourth grade at Symmes Valley. But she admits the classroom isn’t her favorite place saying the classes she likes best are art and gym.

Her lack of interest for school doesn’t surprise DeKay who tries to be a mentor to the young girl.

“She doesn’t realize what all that God has given her, her abilities, but she is so young. We are all trying to guide her.”

ICC has first reading of ordinance to tear down Memorial Hall

If a group or organization doesn’t step up with a solid plan to save the crumbling Memorial Hall, the brick... read more