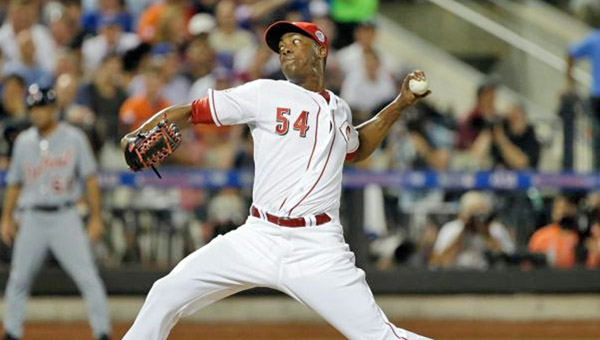 NEW YORK (AP) — Mariano Rivera reported early for work, and walked off to a fitting tribute.

Summoned in the eighth inning to make sure he would pitch in his final All-Star game, the New York Yankees’ indomitable closer got three straight outs and soaked up a pair of standing ovations while helping the American League to a 3-0 victory over the National League on Tuesday night at Citi Field.

“I wanted to pitch,” said Rivera, who took home the MVP trophy. “I think the plan was perfect.”

Rivera and nine other pitchers combined on a three-hitter as the AL snapped a three-game skid and regained home-field advantage in the World Series. Joe Nathan saved it in Rivera’s place after the American League scratched out a pair of runs and got an RBI double from Jason Kipnis.

Robinson Cano hobbled off early after getting hit by a pitch from crosstown rival Matt Harvey of the hosting Mets. X-rays were negative and Cano said he shouldn’t miss any games for the Yankees.

Harvey and opposing starter Max Scherzer were among a record 39 first-time All-Stars in a game that featured four precocious players 21 or younger — baseball’s next generation.

Both came out throwing 99 mph heat, but it was Rivera, at 43 the oldest All-Star since Carlton Fisk in 1991, who was the center of attention in his farewell season. And on this night, with drug suspensions still looming for some of the game’s biggest names, the spotlight found a player who is almost universally respected.

Baseball’s career saves leader came in from the bullpen to Metallica’s “Enter Sandman,” just like across town at Yankee Stadium, and was left alone on the field for 90 seconds to take in a stirring ovation.

“It was a great moment. He is one of the best pitchers that’s ever played this game,” Tigers outfielder Torii Hunter said.

Players on both sides clapped from the top of the dugout steps, and Rivera tipped his cap to the crowd.

Then he went to work, retiring three straight hitters on 16 pitches — all cutters, as usual — before walking off to another ovation and receiving a hug from Detroit ace Justin Verlander.

“I just happened to be standing out there,” Verlander said. “That’s something that I will never forget.”

Next stop, the Hall of Fame.

“It was tough. It was special,” an emotional Rivera said. “Seeing the fans sharing and both teams standing out of the dugout, managers, coaches, players, priceless.”

It was the latest salute to Rivera, set to retire after this season. The 13-time All-Star is on something of a farewell tour, receiving creative gifts at each opposing ballpark he visits for the final time.

He got a rocking chair built out of broken bats in Minnesota, a decorated surfboard and bottle of wine in Oakland.

The last time he was at Citi Field, though, things didn’t go so well. He was honored by the Mets before a game in late May, threw out a ceremonial first ball — and then had his first blown save of the year.

While other All-Stars wore flashy spikes, Rivera stayed with traditional black. No surprise for Mr. Steady.

Rivera pitched a total of nine innings in All-Star play over his career, allowing an unearned run way back in 2000. The only older pitcher to appear in an All-Star game was 47-year-old Satchel Paige 60 years ago, according to STATS.

AL manager Jim Leyland had promised Rivera would pitch. So rather than risk waiting for a save opportunity that might never come, the Detroit Tigers’ skipper made his much-awaited call one inning earlier than Rivera is accustomed.

“First class all the way,” Mets captain David Wright said. “Well deserving for Mariano. I was on the top step clapping and cheering as loud as I could.”

Winning pitcher Chris Sale from the Chicago White Sox worked two perfect innings for the AL, which posted its third shutout and first since 1990 at Wrigley Field to trim the NL lead to 43-39-2 in All-Star games.

The National League didn’t manage a baserunner until Carlos Beltran’s one-out single in the fourth.

It was the ninth All-Star game in New York — most for any city — and second in five years after a farewell to old Yankee Stadium in 2008. But the only other time the Mets hosted was during Shea Stadium’s debut season in 1964, when Philadelphia Phillies outfielder Johnny Callison hit a game-ending homer in the ninth.

This one gave the struggling Mets a chance to pack their cozy ballpark for one of the few times all season. Fans chanted Harvey’s name during pregame introductions, and the 24-year-old sensation delivered with three strikeouts in two shutout innings.

He walked off to a standing ovation and received a pat on the back from NL manager Bruce Bochy of the San Francisco Giants, the defending World Series champions.

Harvey was the youngest All-Star starting pitcher since former Mets ace Dwight Gooden was 23 a quarter-century ago — and the first from the home team since Houston’s Roger Clemens in 2004. Gooden cheered Harvey on from the stands.

All the buildup might have made the phenom a little too excited at the start. Mike Trout doubled inside first base on his opening pitch, and Harvey drilled Cano just above the right knee with a 96 mph fastball on the third.

In obvious pain, Cano initially stayed in the game but limped off after Triple Crown winner Miguel Cabrera struck out — just as he did against Harvey in spring training.

Cano crossed in front of the mound while heading to the dugout, and Harvey patted himself on the chest.

“I didn’t mean to, obviously,” Harvey said. “I feel terrible. Apologies go out to him.”

Cano has a bruised quadriceps but said he’ll be ready to play when the Yankees come out of the All-Star break.

Wright went to the mound for a calming chat with Harvey, who whiffed Jose Bautista to end the inning.

Cano’s name came up all night — even after he left the game. A fan in a Cano shirt ran on the field and gave himself up to security near second base as players backed away a bit, but was tackled anyway to the delight of the crowd.

Cabrera’s bat slipped out of his hands on a swing and sailed 10-15 rows deep, where it nearly clipped another fan in a Cano jersey.

Cabrera’s next cut against loser Patrick Corbin produced a leadoff double in the fourth, and Bautista’s sacrifice fly snapped a 17-inning scoreless streak for the AL that dated to Adrian Gonzalez’s homer off Cliff Lee two years ago in Arizona.

NOTES: Nathan gave Rivera the game ball, and a representative from the Hall of Fame took Rivera’s cap to display in Cooperstown. … Hall of Famer Tom Seaver from the 1969 Miracle Mets threw out the ceremonial first pitch to Wright, who led the NL All-Stars out of the dugout. He singled in the seventh and was pulled for Pittsburgh 3B Pedro Alvarez in the eighth. … Next year’s game is in Minnesota, with 2015 at Cincinnati. … The score of the 2002 All-Star game, which ended in an embarrassing 7-7 tie, was restored on the out-of-town scoreboard after it was noticeably absent during Monday night’s Home Run Derby. … Neil Diamond performed ballpark favorite “Sweet Caroline” from in front of the mound in the middle of the eighth inning. … Corbin’s only loss in 12 decisions this season came July 2 at Citi Field. … The crowd of 45,186 was the largest ever at Citi Field, which opened in 2009. … MLB honored 30 military veterans who were winners of the “Tribute for Heroes” campaign. They lined up before the games along the baselines, while players were introduced on the infield dirt. Then several All-Stars, including Rivera, gave the veterans American flags from ballparks around the majors. … Marc Anthony sang “God Bless America” during the seventh-inning stretch.

Muschamp: Ohio State did report Gators but no violations found