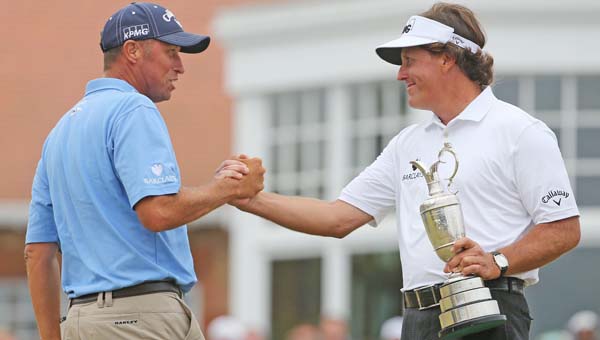 GULLANE, Scotland (AP) — Phil Mickelson is mystified no more by links golf. He has his name etched in a silver claret jug to prove it.

Mickelson delivered his best closing round ever in a major Sunday — at the British Open, of all places — when he ran off four birdies over the last six holes for a 5-under 66 at Muirfield to win the third leg of the career Grand Slam.

“This is such an accomplishment for me because I just never knew if I’d be able to develop the game to play links golf effectively,” Mickelson said. “To play the best round arguably of my career, to putt better than I’ve ever putted, to shoot the round of my life … it feels amazing to win the claret jug.”

At the end of a rough-and-tumble week along the Firth of Forth, Mickelson was the only player under par. He wound up with a three-shot win over Henrik Stenson, one of four players atop the leaderboard during a final round that was up for grabs until Mickelson seized control in the final hour.

Lee Westwood, who started Sunday with a two-shot lead, fell behind for the first time all day with a bogey on the 13th and never recovered. He closed with a 75. Masters champion Adam Scott took the lead with a 4-foot birdie on the 11th, and closed as sloppily as he did last year. He made four bogeys starting at the 13th, and a final bogey on the 18th gave him a 72. At least he has a green jacket from the Masters to console him this year.

Tiger Woods, in his best position to win a major since the crisis in his personal life, stumbled badly on his way to a 74 and was never a serious challenger.

Westwood said he didn’t play all that badly. Instead, he paid tribute to Mickelson for what will be remembered as one of the great closing rounds in major championship history.

“When you birdie four of the last six of a round any day, that’s good going,” Westwood said. “With a decent breeze blowing and some tough flags out there, it’s obviously a pretty good experience. When you do it in a major championship, it’s an even better experience.”

But this major championship? Phil Mickelson?

He had only contended twice in two decades at golf’s oldest championship. One week after he won the Scottish Open in a playoff on the links-styled course of Castle Stuart, Mickelson was simply magical on the back nine of a brown, brittle Muirfield course that hasn’t played this tough since 1966.

Tied for the lead, Mickelson smashed a 3-wood onto the green at the par-5 17th to about 25 feet for a two-putt birdie, and finished in style with a 10-foot birdie putt on the 18th to match the lowest score of this championship.

“Those two 3-woods were the two best shots of the week, to get it on that green,” Mickelson said. “As I was walking up to the green, that was when I realized that this is very much my championship in my control. And I was getting a little emotional. I had to kind of take a second to slow down my walk and try to regain composure.”

Mickelson figured a par on the 18th would be tough for anyone to catch him. When the ball dropped in the center of the cup, he raised both arms in the air to celebrate his fifth career major, tying him with the likes of Seve Ballesteros and Byron Nelson.

“Best round I’ve ever seen him play,” said his caddie, Jim “Bones” Mackay. Mickelson shared a long hug with his caddie and whispered in his ear, “I did it.”

His final surge was right about the time Westwood and Scott began to fold.

Scott, trying to join an exclusive list of players who have won a green jacket and a claret jug in the same year, made a remarkable recovery from the dunes right of the par-3 13th hole, only to miss the 7-foot par putt. He took three putts for bogeys on the next two holes — from long range on the 14th, and from 20 feet on the 15th — and found a bunker on the next.

Westwood started to lose his grip on the jug with bogeys on the seventh and eighth, and failing to birdie the downwind, par-5 ninth. Presented with birdie chances early on the back nine, his putting stroke began to look tentative. He hit into the dunes on the right side of the 13th to make bogey and never caught up.

Westwood and Scott tied for third with Ian Poulter, who played a four-hole stretch in 5-under around the turn and closed with a 67. At 1-over 285, he canceled a flight home in case of a playoff. Moments later, with Mickelson pulling away, the outcome was clear.

Jack Nicklaus said on Twitter, “Phil’s round was incredible. After his bad break on 16 and to then get up and down showed a lot of guts. And the two great shots at 17 ended the tournament.”

Mickelson had to wait for four groups to finish before he could claim the oldest championship in golf. He huddled with his wife and three children, who returned from a quick holiday in Spain, and shared a long embrace.

Making this even sweeter for Mickelson is that just one month ago he lost out on yet another chance to win the U.S. Open, the missing link of a career Grand Slam. Mickelson twice made bogey with wedge in his hand on the back nine at Merion and had his record sixth runner-up finish.

Woods, Nicklaus, Gary Player, Ben Hogan and Gene Sarazen are the only players to win all four professional majors. Mickelson figured it would be the British Open that would hold him back. Now he has the jug, and he never took his hand off during his press conference.

“I think that if I’m able to win the U.S. Open and complete the career Grand Slam, I think that that’s the sign of the complete, great player,” Mickelson said. “And I’m a leg away. And it’s been a tough leg for me.”

For now, Mickelson takes his place among an elite list of winners at Muirfield, which is considered the fairest of the links on the British Open rotation. All but two of the Open champions at Muirfield are in the World Hall of Fame. Mickelson is the only winner who already has been inducted.

It was the 43rd win of his PGA Tour career. The guy who once couldn’t win the big one now has five majors in the last nine years. This one returns him to No. 2 in the world ranking for the first time in nearly three years.

Woods, meanwhile, now has gone 17 majors without winning, and that pursuit of Nicklaus and his benchmark of 18 majors — Woods is stuck on 14 — doesn’t look any closer. He three-putted twice in four holes and looked like just another contender on this Sunday.

He attributed his round to not getting the right pace on the greens, which he said were progressively slower.

“I felt like I was really playing well today, actually the whole week, “ said Woods, who has not broken 70 in the final round of his last seven majors. “I really hit so many good shots and really had control of my ball this week. As I said, it was just trying to get the speed, and I just didn’t get it.”

Woods tied for sixth with Zach Johnson (72) and Hideki Matsuyama of Japan, who was penalized one shot on Saturday for slow play. The 21-year-old Matsuyama, who twice made the cut at the Masters as a teenage amateur, closed with a 70. He has finished in the top 10 in the U.S. Open and British Open this summer.

Hunter Mahan, playing in the final group in back-to-back majors, made a short eagle putt on the ninth to get within one shot of the lead. He bogeyed two of the next three holes and shot 75.

With the All-Star break last week, teams were briefly away from their offices. That small window of time allowed me... read more