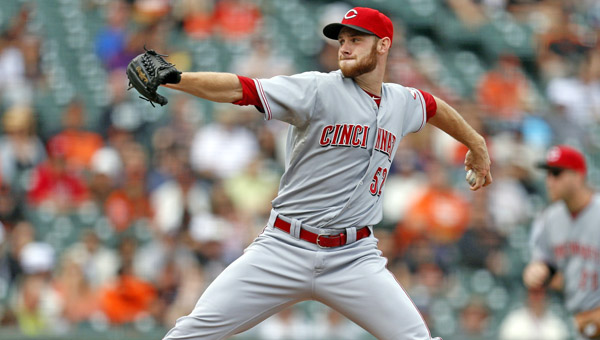 Cincinnati’s Tony Cingrani delivers a pitcher during the first game of Tuesday’s doubleheader against the San Francisco Giants. Cingrani got the win as the Reds won the first game 9-3 but lost the second game 5-3. (MCT Direct Photo)

SAN FRANCISCO (AP) — Even after his Reds fell behind early for a change, the way Cincinnati had been slugging it out against the San Francisco Giants left manager Dusty Baker confident his club would still pull off a win.

Too many missed chances did in Cincinnati this time in a 5-3 loss to the Giants, and the Reds settled for a split of their traditional doubleheader Tuesday night in which they wore their home uniforms and batted last for the nightcap at AT&T Park.

“Man, I just knew we were going to win that game,” Baker said. “They got first blood tonight. That’s kind of weird. Usually we’re jumping them in the first inning. Tonight they were the visiting team and they jumped us in that first inning.”

It took a few more tries than Bochy would have liked after the Reds pounded his team in the first two games.

Hunter Pence hit an RBI single, Gregor Blanco had a sacrifice fly, and Brandon Belt added an RBI groundout in San Francisco’s first win in six tries against the Reds this season after being outscored 34-6 in the first five meetings — including 11-0 on Monday night and 9-3 in the opener Tuesday. The Reds had 10 hits after combining for 32 in the first two games.

The teams were forced to make up a July 4 rainout at Great American Ball Park. Cincinnati batted last and wore home uniforms as the visiting team.

“He’s a fine manager. He’s a guy that I enjoy managing against,” Baker said. “I didn’t even know it was 1,500, so congratulations to Bruce.”

Bochy tipped his cap to the crowd when the milestone was announced as players shook hands afterward.

The Giants were outscored 34-6 over their first five games with Cincinnati before doing just enough in Tuesday’s second game.

“We were never really out of it,” Cincinnati’s Jay Bruce said. “We just couldn’t get the timely hit, and Barry (Zito) was making enough pitches to skirt around it.”

Devin Mesoraco had a three-run homer among his three hits in the opener to put him at 6 for 9 with two homers through the first two games. He didn’t start the second game but struck out as a pinch-hitter to end the seventh, with a runner on second, and stayed in the game.

The Reds called up former Stanford right-hander Greg Reynolds (0-1), a native of nearby Pacifica, from Triple-A Louisville to start the second game. He allowed five runs and eight hits in five innings of his first big league outing since a start Sept. 25, 2011, for Colorado.

Santiago Casilla (4-2) struck out two in 1 1-3 innings for the win, then Sergio Romo recorded the final four outs for his 24th save in 27 opportunities. He struck out Brandon Phillips to end the eighth with two runners aboard, then struck out the side in the ninth after Jay Bruce’s leadoff single — including Mesoraco to end it.

Casilla was the third pitcher in relief of struggling lefty Zito, replaced after allowing a pair of two-out hits in the fifth including Todd Frazier’s RBI double.

Zito, who won Game 1 of the World Series last fall, saw his winless streak reach nine starts since the lefty beat Oakland on May 30.

Frazier finished with two doubles and three of Cincinnati’s hits on a night the Reds missed multiple chances. They stranded 14 baserunners, seven in scoring position. Bruce also had three hits.

“He was Zito. Normal Barry,” Bruce said. “Makes enough pitches and knows how to pitch. He’s found a way to make pitches in order to get people out and do damage control when he does start giving up some hits. That’s what still gives him a chance out there.”

Earlier, Joey Votto and Zack Cozart also homered for the swinging Reds, who had pizza and sushi delivered to the clubhouse for a quick dinner between games.

“We’ve got some hot bats,” Mesoraco said after the opener. “Ride it out as long as you can. You want to go out there and put up as many runs as you can, especially early, and take a little pressure off the starting pitcher. That’s what we were able to do the last two nights.”

Cozart finished 4 for 4 with two RBIs and three runs to back Tony Cingrani (4-1). The left-hander was added to the roster as the Reds’ permitted 26th player for the doubleheader. He was headed back to the Arizona Rookie League after the game to fulfill the final five days required after being optioned previously to the minors. He is set to return and start Sunday for Cincinnati.

The Reds had dominated the Giants this year after allowing San Francisco to rally from an 0-2 deficit to win the NL division series matchup last October.

In the opener, the Reds knocked Eric Surkamp (0-1) out after 2 2-3 innings in his first start since late September 2011 after undergoing Tommy John elbow surgery.

“I still have a lot of work to do coming back,” Surkamp said. “I feel like I’m close. I feel a little herky-jerky throwing pitches.”

Notes: Attendance for the two-for-one at AT&T Park was 42,310. Both games count as home stats for the Giants. … Between games, the Reds optioned INF Neftali Soto to Triple-A Louisville and transferred LHP Sean Marshall to the 60-day disabled list. … Shin-Soo Choo had his career-best hitting streak for the Reds snapped at 16 games in the opener. He was 0 for 6 on the day. … Cincinnati played its first single-admission doubleheader since Aug. 24, 2011, at the Marlins.

Berry thrilled to be back with Reds