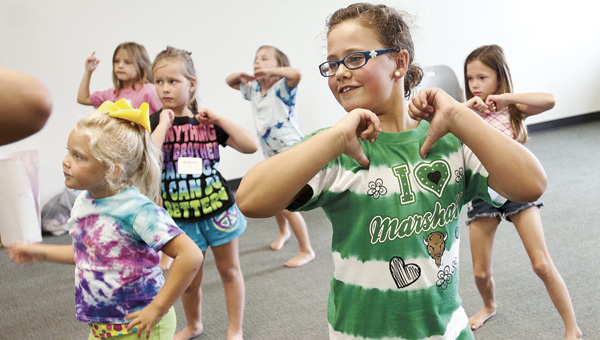 (ABOVE) Gracie Dillon works on her routine with her classmates during dance class Wednesday at the Academy of Excellence at Ohio University Proctorville Center.

PROCTORVILLE — When the Ohio University Southern’s Proctorville Center joined the Ironton campus in offering the Academy of Excellence summer camp, only 22 children signed up.

Three years later, the numbers have more than quadrupled.

This year, 91 first through sixth graders joined the two-week academic funfest and participated in wacky science classes, dance, culinary arts and more. Through a partnership with First Baptist Church in Proctorville, 40 children from the Kinder Kare daycare were also able to attend the camp.

Carol Ward, coordinator of the program, said numbers for this year’s camp increased due to spreading the word early on in the Fairland elementary schools.

“In the past they haven’t done that so that helped create excitement about the program,” said Ward, who is also a reading intervention specialist with the school district.

Ward said when creating this year’s camp curriculum, she wanted activities that children wouldn’t typically get to do during the regular school year.

“I love them learning outside of the box,” Ward said. “I want them to use their summer to do things that are fun that they don’t do that is typical in the classroom.”

This year, children in the crime lab analyzed DNA samples and used microscopes, while others in the Messy Masterpieces class painted with the tongues and made tie-dyed shirts.

“Some kids during the middle of it (the camp) switched to karate so they could try it out,” Ward said. “I told them, ‘It’s your summer. If you want to switch classes and you want to try something out, tell me. Let’s do it.’”

Ward said the teachers this year made the classes exciting for the children and the 20 to 30 Fairland High School volunteers were a big help.

“You just can’t help to walk into a classroom and smile because you see all the kids totally engaged,” Ward said. “Sometimes we miss that during the school year. They go to school and they are doing the same thing day in, day out. We are not doing worksheets. Everything is hands-on. Everything is mobile. Everything is up, up, up. Go, go, go.”

There will also be inflatables, food and performances by the dance and karate classes.

Ward said her goal next year is to get 100 children enrolled.

“We want the kids, families, siblings to know that college is attainable at any age level,” Ward said. “Anybody can do it and it’s a positive thing.”

Meyer, Ohio State talk of the conference on eve of season