Meyer, Ohio State talk of the conference on eve of season 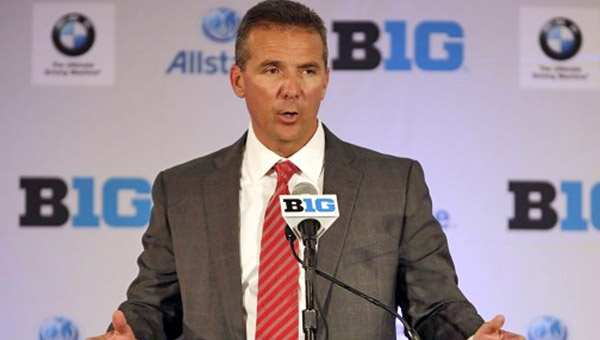 CHICAGO (AP) — Urban Meyer was hailed as a savior when he agreed to take over Ohio State in the wake of the tattoo scandal that sullied the program. That support became even more frenzied when he coached the Buckeyes to a 12-0 record in his first season.

Like Meyer said Wednesday at the Big Ten media days, it’s been a great year — right up until last weekend.

Running back Carlos Hyde, star cornerback Bradley Roby and two freshmen were disciplined by the school after a run of legal problems that brought to mind the end of Jim Tressel’s time in Columbus, and once again raised questions about Meyer and how he disciplines his players.

“When a mistake happens or something happened, you have to react and get it done,” Meyer said. “So I’m disappointed. I think furious might be the word that would best describe when I first got the phone call, because, like I said, for 12 months it’s been really, really good.”

Hyde, who had a team-high 17 touchdowns last season, was suspended indefinitely after he was named a person of interest in an investigation into an alleged assault of a woman at a downtown Columbus bar early Saturday morning. Roby was one of the players selected to represent Ohio State at the kickoff event in Chicago, but he was pulled after he was arrested in Bloomington, Ind., and accused of misdemeanor battery.

Tight end Marcus Baugh also was suspended from all team activities, and Meyer decided to send defensive lineman Tim Gardner back home to Indianapolis. Baugh was arrested last weekend for underage possession of alcohol and possessing a fake identification, and Gardner was charged Saturday night by Columbus police with obstruction of official business.

“I don’t know that you can really blame a guy going out and making a poor choice on coach Meyer because of free will,” offensive tackle Jack Mewhort said. “He did not walk in with us everywhere we go, telling us to do this and that. He has a set of core values in place and we know them and we’re told them every day. We know as players that if we violate them we’re going to be held accountable for our actions.”

The off-the-field problems come with Meyer facing questions about his relationship with Aaron Hernandez while the tight end played for him at Florida. Hernandez has been arrested and charged with murder in Massachusetts.

Asked what it was like to hear his name mentioned in connection with Hernandez in the wake of the charges, Meyer responded: “I felt awful. It’s a sick feeling. Your thoughts and prayers are with the family of the victims. Every player situation, every recruit situation, all I know is (it) will always be in the back of my mind. That’s all I can say.”

Ohio State was barred from postseason play last year as part of its punishment for a memorabilia-for-cash scandal that led to the resignation of Tressel. Luke Fickell coached the Buckeyes for a year before Meyer took the reins of the storied program after taking a season off.

Meyer spent six years at Florida, winning national titles in 2006 and 2008. He also had 25 players account for 31 arrests during his tenure with the Gators.

While Meyer said he isn’t worried about his reputation, he acknowledged that the criticism over disciplinary issues still stings.

“I’m a human, so it does,” he said. “I don’t read. I don’t really get involved with following stuff, because I think people need to get facts before they start just making accusations and those type of things. I’m human and I think that is something that I’m constantly evaluating and making sure we are doing the right thing.”

With Hyde in particular limbo, Meyer said he would evaluate all the facts before making any decisions about the senior. Sgt. Rich Weiner, a spokesman for the Columbus Police Department, said the investigation was ongoing and cautioned against any rush to judgment in any direction.

“I’ve been following reports on this case and most of them have been inaccurate,” Weiner said in a phone interview. Weiner said investigators plan to interview Hyde and the woman when she returns next week from a scheduled vacation out of the country.

The questionable future for Hyde and Roby casts a shadow over Ohio State’s chance for another undefeated season. Star quarterback Braxton Miller leads a talented group of returning players, making the Buckeyes the favorite in the Big Ten and a legitimate contender for the national title.

Meyer, for one, is vowing to keep the focus on the field for the sake of the other players on the squad.

“I don’t want a disruption for this team,” he said. “The guys work too hard. To have a couple of knuckleheads make some decisions that reflect the entire program, that’s not — I guess it’s part of the deal. It’s something that bothers me, bothers our staff, and we work very hard to avoid with our players.”