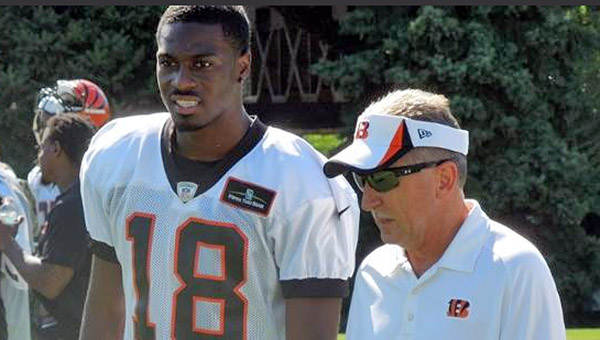 Cincinnati Bengals’ wide receiver A.J. Green (left) walks off the practice field at training camp after he suffered a twisted knee while attempting to make the catch of a deflected pass. (Photo Courtesy of The Cincinnati Bengals)

CINCINNATI (AP) — All-Pro receiver A.J. Green twisted his left knee while trying to make a sideline catch during the Cincinnati Bengals’ first practice of training camp on Thursday, then walked to the trainer’s room for treatment.

Green planted his left foot and and twisted the knee while reaching for the ball, which deflected off his upper arm. He landed hard, rolled onto his back and grabbed the knee before putting his hands on the top of his helmet in pain.

Green stayed down for a couple of minutes while a trainer examined the knee and a crew filming for HBO’s “Hard Knocks” show sped to the spot. He got up, walked about 20 yards, then stopped and grabbed the knee again. Finally, he headed for the locker room without assistance.

The injury occurred during the last half-hour of practice.

The Bengals’ most valuable player was trying to make an over-the-shoulder catch with cornerback Terence Newman guarding him along the sideline. Newman lightly pushed Green in the back he stretched to try for an extraordinary catch.

“He just twisted himself, one of A.J.’s contortions,” Lewis said.

Right tackle Andre Smith was back with the Bengals for the start of camp, but couldn’t practice because of an injured calf. Smith, whose weight was listed at 342 pounds, expects to practice on Sunday.

Smith signed a three-year contract last April, allowing the Bengals to keep their offensive line intact. He was the only one who missed all of the team’s offseason workouts and a mandatory minicamp because of a personal issue. He had to watch practice on Thursday because of the calf injury.

“Hopefully I’ll be back on Sunday,” said Smith, wearing a floppy white sun hat. “I missed my team (in the offseason), most definitely, but as I told Marvin, I had some personal things I had to take care of. That’s pretty much it. Everything’s fine. No more hiccups. I’ll be good.”

The coaches added things to the playbook in the offseason, and Smith wasn’t around to learn and practice them. He thinks he can catch up quickly.

“I don’t have anything to worry about when it comes to football,” Smith said. “I pick up things really fast.”

His teammates were glad that he showed up for the start of camp so he could start catching up on what he missed.

“It is important,” quarterback Andy Dalton said. “He wasn’t here for OTAs and minicamp. I don’t know what the timetable is on him but I’m sure he will be back soon. It will be good for him to be playing football again.

“We’ve got to get everybody out there.”

Cornerback Dre Kirkpatrick was cleared to fully participate in the first practice, which was a big moment for the first-round draft pick. Kirkpatrick hurt his left knee during workouts last summer, forcing him to miss all of training camp and the first half of the season. It bothered him again at the end of the season, limiting him to five games total.

“I’m probably the only guy in the country that’s excited about training camp,” Kirkpatrick said before the practice.

Kirkpatrick expected to challenge for a starting job right away as a rookie. The injury changed his perspective in a lot of ways.

“The injury just set me back and made me think like, ‘Wow, look where I’m at,”’ he said. “At first, I didn’t look at it like that. I was just so ready to go, I was anxious, I felt like I had to prove something.

“But now it’s a blessing to even be in this situation.”

NOTES: Kirkpatrick guarded Green on several plays early in practice, keeping up with him on a deep throw. The two of them slipped and fell on another throw at the end of the practice field. … The Bengals had eight players limited by injuries: receiver Tyrone Goard (finger), fullback Chris Pressley (knee), quarterback Zac Robinson (elbow), halfback Bernard Scott (knee), receiver Brandon Tate (hamstring), halfback Cedric Peerman (ankle), tight end Bryce Davis (illness) and Smith. … RB Giovani Bernard, a second-round pick from North Carolina, was greeted at the airport by a “Hard Knocks” film crew when he arrived in town, an indication he’ll be one of the show’s story lines. “They met me at the airport, which was pretty weird,” he said.

LOS ANGELES (AP) — Mat Latos was able to get deep into the game because of his pitch count. He... read more