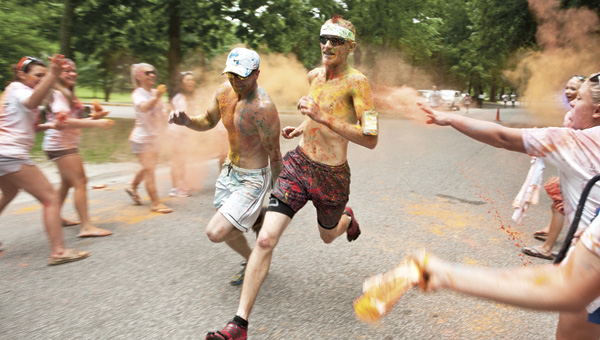 Powdered paint floats in the air as participants in the Color Splash 5K cross the finish line Saturday morning in Central Park in Ashland, Ky.

ASHLAND, Ky. — By mid-morning a purple cloud was likely hanging over Central Park in Ashland, Ky., as 800 runners took off for the inaugural Color Splash 5K run.

Unique to this kind of 5K, however, were the bags of powdered paint handed out to participants. Before the start of the race, seasoned runners and newbies alike doused themselves with every color of the rainbow in celebration of the event.

The starting gun wasn’t even a gun, but a sort of fire extinguisher that blew a cloud of purple paint to signify the race had begun. And when the center street of the park cleared, all that was left was a spectrum on the pavement.

Along the way, runners were splashed with various colors by volunteers on the sidelines, as well as another blast from the purple paint gun at the finish line.

Although the 5K was the first of its kind for Ashland, color-themed runs are not a new phenomenon. At the end of August, The Color Run, a nation-wide race, will go through Huntington, W.Va.

But this was Kelly Daniels’ first experience getting painted from head to toe while running.

“It was fun,” the Ironton native and KDMC neuro nurse said. “I had seen them but they haven’t done any locally.”

Also new to the experience was Kristen Epling from Mingo County, W.Va. This was also Epling’s first 5K.

“It keeps you energized with the colors,” Epling said. “You’re not thinking about how tired you are.”

The event was hosted by King’s Daughters Medical Center’s sports medicine program and Marshall University’s orthopaedics program, with proceeds from the run going to fund a concussion testing and sports physical program for high school athletes.

Dr. Andy Gilliland, with the KDMC sports medicine department, said the inaugural Color Splash run was both great and a disappointment.

Great because so many people participated; a disappointment because registration had to be capped at 800 racers for safety reasons.

But the aim of the race, Gilliland said, was simple.

“We wanted to help reach novice and new runners in a fun way,” Gilliland said.

“We didn’t want to time the race,” she said. “We just wanted people to want to do it and feel like they could run or walk. We were looking for the general public, not just the avid runners.”

Esenbock said hopefully the race will happen again next year.

Royersville MBC to have homecoming

Royersville Missionary Baptist Church will have homecoming beginning at 10 a.m. Sunday. Jamie Pancake will preach and there will be... read more