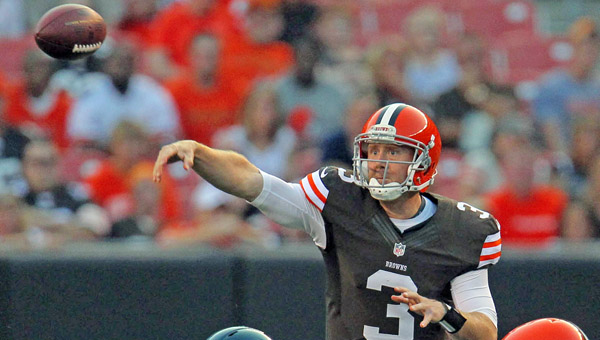 BEREA (AP) — His hair is still orangey, just a shade off the color of the Browns’ helmets. He’s still got that cannon right arm, the one that made the New York Yankees draft him and enabled him to throw 75 touchdown passes at Oklahoma State.

But he’s no longer a wide-eyed NFL rookie. And as Weeden enters his second pro season, he’s got experience, an offense catered to his strengths and a brand new outlook.

“I feel like a completely different player,” he said.

The Browns have their fingers crossed that Weeden, who was both efficient and erratic last season, can develop into the long-term starter he was projected to be when the club selected the 29-year-old with the No. 22 overall pick in 2012. Weeden showed signs of being that guy last year, just not enough of them.

He passed for 3,385 yards — a franchise rookie record — with 14 touchdowns, but there were too many moments when the game seemed to be moving much faster than Weeden, who may have been unfairly judged as part of an elite rookie QB class headlined by Robert Griffin III, Andrew Luck, Russell Wilson and Ryan Tannehill. Weeden was held to a standard he wasn’t quite ready to reach.

However, Weeden believes he grew from last year and is eager to show the Browns — and prove to some skeptical Cleveland fans — that he’s ready to take a major step forward.

“It’s knowing what to expect,” Weeden said earlier this week. “I didn’t know anyone in the locker room (last year). I didn’t know the routine. There are just so many unknowns. Now I’ve been in it for a year, and I know how the weekly routine goes, and I’ve got myself into a routine.”

Weeden seems to have the backing of Cleveland’s new coaching staff and an overhauled front office that didn’t draft him. Although first-year coach Rob Chudzinski has not yet named Weeden his starter, the rifle-armed QB opened training camp with a leg up on Jason Campbell and Brian Hoyer, two experienced veterans who give the Browns quality depth in case Weeden falls on his face.

The Browns have been impressed with the way Weeden immersed himself into learning Chudzinski’s complex offense, which should better allow him to spread the ball around the field to his receivers.

There was a perception last season that Weeden, who played four seasons of minor league baseball before going to college, wasn’t a great student or hard worker. But that hasn’t been an issue whatsoever as Weeden has shown a strong desire to improve and to lead. The Browns have spent months evaluating Weeden, and to this point, he’s passed every test.

“He has worked real hard and he’s done everything that they’ve asked him to do,” CEO Joe Banner said. “He’s got obviously a lot more work, but he’s gotten in here and he’s gotten a chance to progress on the mental aspect of the position, so I think everyone is encouraged on how hard he’s working and how bad it seems he wants to do well.”

Weeden’s first day of training camp didn’t start so well. He looked tentative on some early passes, forcing the ball into tight spots — one of his issues last year.

But he settled in, and before long, Weeden was threading completions all over the field, hooking up on long passes to wide receivers Greg Little, Davone Bess and Josh Gordon.

The change in Weeden has been noticeable to his teammates.

“Brandon’s a workhorse,” running back Trent Richardson said. “I had no problem with Brandon last year and I have no problem with him this year. All the guys are comfortable with him. He’s trusting us. He’s trusting himself. He’s making throws. He’s making corrections, and that first year was our first year. We put that behind us. We’re not going to look back at that.

“This year’s a whole other year. Brandon, man, he’s fresh. He’s ready to go. He’s got that arm going and he’s battling at the same time.”

Norv Turner agrees. Cleveland’s new offensive coordinator, who has a proven track record of developing young QBs, has been impressed by Weeden’s growth and sees his potential. Turner reeled off a list of quarterbacks — Jim Everett, Gus Frerotte, Trent Green, Brad Johnson — who blossomed under his tutelage and he feels Weeden may one day be added to that list.

Turner said Weeden’s ability to make a big leap in his second year depends on a variety of factors.

“It’s totally based on No. 1, the guy, and then the situation he was in,” Turner said, “and so many people get caught up in where a guy is. A lot of it depends on the situation he’s put in, the offensive line, the playmakers around him, how good a defensive football team you have. There’s so many things that go into it. But I think Brandon is fortunate, he’s had the experience of starting 15 games in this league, that’s a plus when you start working with a player who hasn’t played a lot. And then I think he’s taken to what we’re doing.

“I expect him to play at a high level.”

NOTES: WR Josh Gordon was not limited and didn’t seem to have any issues after going down with a cramp in Thursday’s practice. … WR David Nelson was activated from the PUP list and was limited in drills. He missed last season with Buffalo after tearing his anterior cruciate ligament in the Bills’ opener. Nelson, who signed with Cleveland as a free agent, did not speak with reporters following practice. … OT Oneil Cousins rolled his ankle and left practice early. Chudzinski said Cousins will be evaluated. … The Browns will practice in pads for the first time on Saturday. … DT Phil Taylor remained sidelined with a calf strain, but Chudzinski expects him back in the next few days.