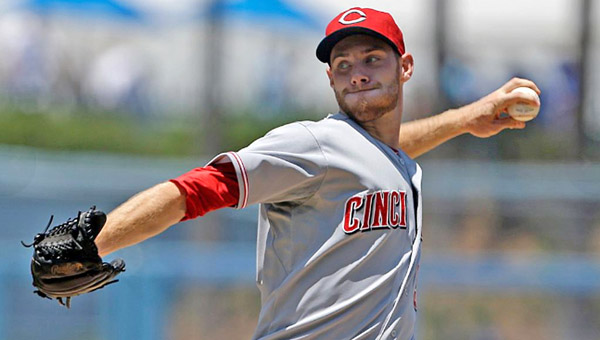 Cincinnati rookie left-hander Tony Cingrani pitched seven shutout innings, struck out 11 and allowed just one hit against the Los Angeles Dodgers on Sunday. However, the Reds failed to score and lost 1-0 in 11 innings. (Photo Courtesy of The Cincinnati Reds)

LOS ANGELES (AP) — Cincinnati Reds pitchers set a franchise record with 20 strikeouts Sunday against the Los Angeles Dodgers. Three of them came against Yasiel Puig, who had the last laugh.

The excitable rookie homered with two outs in the 11th inning, giving the Dodgers a 1-0 victory after left-hander Tony Cingrani held them to one hit over seven innings and tied a career high with 11 strikeouts in his 12th big league start.

Facing a lineup missing leadoff hitter Carl Crawford for the second straight day because of a high temperature, Cingrani retired 18 of the 20 batters he faced and worked in perfect harmony with catcher Devin Mesoraco before getting lifted for a pinch-hitter.

“That was Tony’s best game. He was on,” manager Dusty Baker said. “He was throwing his fastball up when he wanted to and down when he wanted to, an occasional breaking ball and changeup, and Mesoraco was directing him through a very tough lineup. He did his job, but we had to go get him because we had to try to score some runs.”

The only hit against Cingrani was a two-out single through the box in the third inning by Dodgers pitcher Chris Capuano — his first hit of the season. Mark Ellis followed with a towering drive toward the left-field corner that Chris Heisey caught right in front of the short fence.

Los Angeles didn’t get another baserunner against the 24-year-old left-hander until Puig walked on a full count leading off the seventh. But he was picked off first base with Adrian Gonzalez — the Dodgers’ RBI leader — at the plate.

“Tony has a really good fastball and he goes right after guys and doesn’t fall behind in the count,” Mesoraco said. “He expands a little bit with his fastball when he gets two strikes. That’s his biggest thing. The third time through, they’d seen the fastball a couple of times, so we had to mix it up. And he threw some really good sliders to punch guys out.”

Gonzalez, Hanley Ramirez and Tim Federowicz also fanned three times each as the Dodgers established a team high since 1900.

“We had a good game plan. We pitched them tough and did what we set out to do,” Mesoraco said. “That lineup is outstanding. They all have power and can hit for average, so it’s definitely a challenge. We did the best we could. It wasn’t quite good enough today, but we did well.”

The same couldn’t be said for Cincinnati’s vaunted offense, which totaled seven runs in the four-game series. Capuano held the Reds to three hits over 6 2-3 innings. The left-hander retired 15 of his first 16 batters, less than 24 hours after teammate Hyun-Jin Ryu pitched two-hit ball over seven innings and retired his final 13 in a 4-1 victory.

Joey Votto’s two-out single in the first was Cincinnati’s only hit until Mesoraco snapped a string of 13 straight outs with a leadoff double in the sixth. Mesoraco advanced to third on Cingrani’s sacrifice bunt, and Baker put on a suicide squeeze with Derrick Robinson at the plate.

Mesoraco had to return to third after the rookie fouled off an 0-1 pitch, and was retired in a rundown after Robinson grounded to third baseman Juan Uribe with the infield playing in.

“You’ve got to take a shot right there,” Baker said. “I mean, what else are you supposed to do? How many two-out hits did we get today? So you’ve got to go on contact. We tried to squeeze him in because we realized how tough runs were going to come by.”

The Reds wasted another leadoff double in the seventh by Votto.

“When you face a good pitching staff, you’re not going to get a bunch of chances. But when you get your chances, you’ve got to capitalize on them,” Baker said. “Our guys are trying the best they can. I mean, everybody’s talking about our on-base percentage, but you’ve got to have some guys drive them in. We were frustrated all day.”

Puig drove an 0-1 pitch deep into the left-field pavilion against rookie Curtis Partch (0-1) for his 10th homer and 23rd RBI in 48 big league games.

“It wasn’t a terrible pitch,” Mesoraco said. “I think, more than anything, it just had a little bit of elevation. In that situation, guys are trying to hit home runs, and Puig was able to get it in the air. As much as he’s chased pitches against us this series, I wanted it to be a ball.”

Brandon League (6-3) pitched two hitless innings for the win. The NL West-leading Dodgers, who took three of four from the Reds, won for the 26th time in 32 games and extended their lead to 2 1/2 games over Arizona. On June 21, they were a season-worst 12 games under .500 and 9 1/2 games out of first place.

“I don’t know anything about destiny, but we’re just finding a way to win,” League said.

NOTES: Cincinnati fell to 19-19 in games started by opposing lefties. … Reds RHP Greg Reynolds, out of minor league options, was designated for assignment to make room for Cingrani, who was optioned to the minors during the All-Star break. … Cingrani threw 11 pitches to his first batter. Ellis popped out after fouling off six in a row. … Votto and Shin-Soo Choo entered 1-2 in the NL in on-base percentage. The last pair of Reds players to end a season in the top two were Joe Morgan (.466) and Pete Rose (.406). … Phillips, the Reds’ cleanup hitter, was 1 for 13 with no RBIs during the four-game series. He has driven in two runs in his last seven games.

CHICAGO (AP) — Nebraska has won at least nine games in each of the last five seasons. Only Alabama, Boise... read more