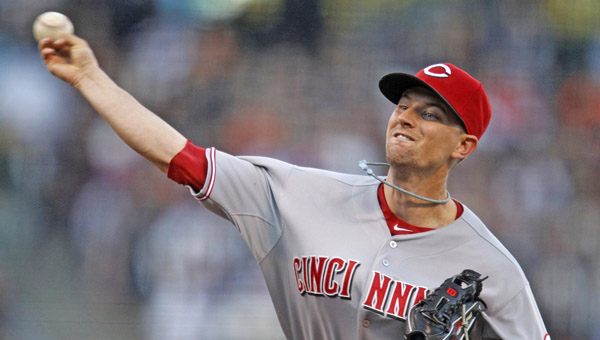 SAN DIEGO (AP) — There is no secret when it comes to facing Cincinnati Reds reliever Aroldis Chapman and his 100 mph fastball.

Denorfia did plenty against Chapman on Monday night, hitting a two-run, pinch-hit homer in the bottom of the ninth inning to give the Padres a 2-1 victory over the Reds.

“It sounded great off the bat,” Padres manager Bud Black said. “I say 80 percent of home runs you know it from the sound no matter who is pitching. But that sound tonight on his homer there was no doubt about it.”

With the Reds leading, 1-0, Chapman (3-4) walked leadoff batter Yonder Alonso on a 3-2 pitch. Denorfia then drove a 98 mph first-pitch offering from Chapman over the center-field fence 423 feet away to deal the Reds their fourth straight loss.

“It was pretty sweet. It was one of those when you hit it hard on that part of the bat, you don’t even feel the vibration, it felt great,” Denorfia said of his first game-ending home run of his career and third walk-off hit of his career.

“It was a fastball like I throw everybody,” said Chapman, who threw a 102 mph fastball in Alonso’s at-bat. “I just threw a fastball and he hit a home run and there’s nothing I can do.”

Chapman was disappointed he walked Alonso.

“It bothered me because he was left-handed,” Chapman said. “I walked him and after that I had to just continue going.”

Luke Gregerson (5-5) pitched the ninth for the win.

San Diego natives Mike Leake and Sean O’Sullivan matched up against each other.

Leake went seven scoreless innings for the Reds, allowing four singles. He retired 12 of the final 13 batters he faced.

O’Sullivan, making his third start for the season for the Padres, went six innings and allowed one run on five hits. He walked five and struck out one.

Reds center fielder Derrick Robinson led off the fifth with a triple off the fence in left-center. He scored when Cesar Izturis hit a grounder to first, which Alonso grabbed, touched first base for the putout then fired home, but Robinson just beat the throw to catcher Nick Hundley.

That snapped a scoreless streak of 22 innings for the Reds going back to the second inning of Saturday night’s game against the Dodgers in Los Angeles. They have scored just three runs in their last four games.

“O’Sullivan hung in there and made some pitches where he had to,” Black said. “He battled and gave up only one run.”

Cincinnati loaded the bases in the fifth, but O’Sullivan got Devin Mesoraco to hit a grounder to short.

The teams combined to leave 15 runners on base through the first five innings — nine for the Reds. They also left the bases loaded in the first, while the Padres left them loaded in the third.

Leake got Mark Kotsay to ground to first baseman Joey Votto with the bases loaded to end the third.

The only batter to reach after the third against Leake was Everth Cabrera, who got on with an infield single leading off the fifth, but he was caught stealing by Mesoraco. Cabrera had two of the four hits off Leake.

NOTES: Reds OF Shin-Soo Choo is listed as day-to-day after twisting his left ankle stealing second Sunday in Los Angeles. … Reds 2B Brandon Phillips was also not in the starting lineup Monday. Reds manager Dusty Baker had told Phillips before Sunday’s game that he would get the day off. “I like to give the guys from the All-Star team a day off even after they get back after the All-Star game,” Baker said. Izturis got the start at second for the Reds. … Reds P Jonathan Broxton, on the DL since June 15 (flexor mass sprain in his right elbow) will begin a rehab assignment in Triple-A Louisville on Tuesday … Padres OF Carlos Quentin tweaked his left knee on a swing in Sunday’s game in Arizona and was available to pinch hit.

CINCINNATI (AP) — Giovani Bernard lined up in the backfield, caught a short pass and made a quick plant-and-cut move... read more