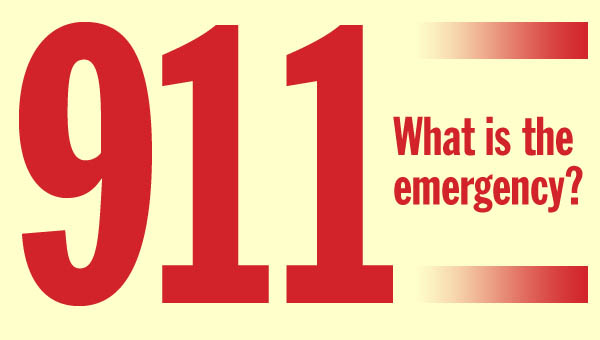 In 2012, both emergency agencies used 61.9 percent of the 1/2 percent sales tax that funds emergency services for Lawrence County.

In 2012, both emergency agencies used 61.9 percent of the 1/2 percent sales tax that funds emergency services for Lawrence County.

In 1998 the county commissioners put on that additional sales tax to fund what was then called emergency services. Right now it is used to fund the sheriff’s office, EMS, emergency management agency and 911 dispatching. Money in that fund can only be spent on emergency operations. In no way can it fund other county offices.

“It is a 24-hour, seven-day a-week operation,” County Auditor Jason Stephens said. “There are no holidays or weekends. In fact, those are usually their busiest times. When someone does take a holiday, somebody takes vacation, you can’t leave an empty desk. Now you are usually paying time and a half. You either have a service or you don’t. You can’t operate an ambulance service or dispatching eight hours a day Monday through Friday.”

However, sales tax revenues depend on the comfort zone of those who make purchases. When there is a sense the economy is solid, consumers will be quicker to hand out those dollars from their wallets. When they are not so sure, discretionary spending and purchasing high-ticket items can go south.

This year the county’s budget commission isn’t sure as much will come in, only certifying $2,400,000.

Of that, $1,000,000 is going toward the county’s EMS service begun in 2011 after the tri-county Southeastern Ohio Emergency Medical Services (SEOEMS) that had served Lawrence was dissolved. The last year SEOEMS was in existence cost Lawrence County $1,255,781 with the rest coming from patient payments.

This year the county EMS’ budget is projected to reach $3,492,600 with $2.3 million of that expected to come from patient payments. The rest will come from the county and there will still be an expected deficit of $192,600, if more funds aren’t found.

When the EMS started in 2011, “We were at the bottom at the beginning salaries in the region,” Buddy Fry, executive director, said. “The first of 2012 our people got an increase and that moved us up from the bottom. But just about a month ago, Cabell County gave a $2,500 a year increase across the board and that put us back on the bottom.”

On top of that, Ohio requires public employees covered by Public Employee Retirement Fund to work 32 years before they can retire. In West Virginia their EMS have a 20-year retirement.

A 24-hour shift, plus a job where life and death decisions must be made should have fair compensation, Fry contends.

“The average person works eight hours a day,” he said. “They go in at 8 and go home at 4. By that time my people are only through one-third of their day. Then at 3 in the morning in 20-degree weather, they have to go over a hill to get a 300-pound person out of a car. In the average job, people don’t have to do that.”

There are five EMS stations across the county with two ambulances housed at Ironton and at a single vehicle. Those vehicles are mini-trauma centers equipped with 15-lead EKGs, IVs and intubation kits, even infant car seats for babies who must transported. Minimum cost for a single ambulance is $106,000 with at least $10,000 worth of equipment in each one. With the high speeds and heavy use they are expected to last no more than six years.

Four of those six were purchased in 2011 or 2012, which gives the county a break on maintenance as they are under warranty.

What the EMS doesn’t get relief from is the bill for the fuel to make them run. Last year, keeping gasoline in those cars cost the EMS $110,313. And while some equipment can last several years, supplies like needles, tubing, bandages and medicine have a one-time life span.

In the world of for-profit businesses adding a few more dollars to the price tag of an item can cover costs and maintain a margin target. But not for an EMS service. While it does charge those who use the service, increasing that fee to cover any deficits or make the entire agency self-supporting isn’t an option, Fry said. Most emergency calls are to patients covered by either Medicare or Medicaid and those government insurance plans only pay so much, no negotiation.

“Those two agencies only pay so much for a run,” Fry said. “It doesn’t matter. Let’s say Medicare will pay $450 on an advanced life support run. We can bill $450, $850 or $10,050. They are only going pay the amount they are going to pay. In most cases we cannot go back on the patients and make them pay it. It is against the law.”

Getting that ambulance out on a run takes the cool expertise of a 911 dispatcher working in an atmosphere of phones ringing and frantic voices on the line. About a year ago, the county 911 was placed under the jurisdiction of Lawrence County Sheriff Jeff Lawless.

Right now there are two dispatchers per eight-hour shift who field approximately 140 phone calls a day — 20 of those are non-emergency. Two dispatchers split the calls for law enforcement, fire and EMS.

But that dispatcher costs the county more than just $459.20 a week. There is PERS retirement that adds 14 percent more to the county’s obligation, plus another $228.20 a week the county pays out for health insurance.

“We are going to need $45,000 this year to keep it going the way it is to pay the salaries of the administrator and current dispatchers,” Lawless said. “Also equipment is very expensive and is updated quite frequently for 911 because technology changes.”

That can add a price tag of $65,000. Even the basic phone service brings a charge of $6,000 a year for the dispatching service.

For the sheriff, this is just the reality he has to live with.

At year’s end the dispatching service will be $45,649 in the hole, if no more appropriations are made. If projections... read more