Reaping what they didn’t sow 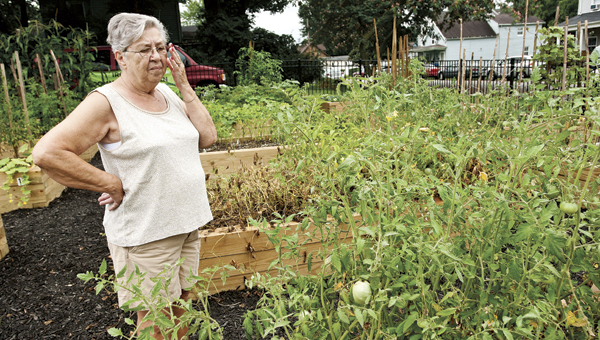 Rosemary Joseph adjusts her glasses as she looks down at nearly empty plots at the Ironton Community Garden late Wednesday morning.

While a lot of his classmates were sleeping in on humid summer mornings, 7-year-old Thomas Stapleton went over each day with his grandmother, Mary Van Meter, to Ironton’s new community garden at the corner of Adams and Seventh streets.

The garden, made up of 30 plots, is the joint venture of Our Lady of Bellefonte Hospital, Ironton-Lawrence County Community Action Organization and Ironton In Bloom. Its goal is to provide a place for gardeners who are either apartment dwellers or don’t have enough space in their own backyard to enjoy their hobby.

There Thomas watered his crop of tomatoes and pulled out any weeds trying to edge them out. So proud was he of his endeavor, he even put up a special sign marking the plot as “Thomas’ Garden.”

That’s the way it was last week when the duo walked over from Van Meter’s apartment to see how the crops were progressing, when they discovered there weren’t any crops any more.

“There were good big green tomatoes and they cleaned his out,” Van Meter said. “They were nice, good tomatoes and he wanted to give them to his parents.”

Nearby were the plots of Rosemary Joseph who was nurturing squash, peppers and green beans. Last Sunday she harvested enough beans for supper. A couple days later, Joseph went back to get the rest and they were gone, Van Meter said.

“I don’t think they know the meaning of a community garden,” Van Meter said. “They think anyone can go in and get it. They don’t understand we paid to participate.”

Another victim is Shawnee Mental Health that had bought a dozen plots for its clients who have also complained about having produce taken.

“The community thinks it is there for them, but we paid for the plots and did this all for our clients,” Bud Treadway, wellness coach at Shawnee, said. “They are very upset that people are taking their things. I think the community has a misunderstanding. They think they can go in. I ask them ‘Do you have a plot? You have to pay for that.’”

Shawnee put out close to $500 to allow their clients to participate in the community garden.

“This is one thing we thought would help bring them out of their depression and brighten their days,” Treadway said.

In the spring 30 Ironton residents each paid $20 to be able to plant, till and harvest 4 by 8 foot plots. Since then the plots enclosed in a wrought-iron fence have blossomed with mainly produce including squash, beans, tomatoes and herbs. Some gardeners decided to put out zinnias and marigolds instead but no matter the choice of plants, maintaining the plots is the responsibility of the gardeners.

While there is high fencing around the community garden, the gates this season were not locked. And that might be the answer to stop unwanted reaping of what others have sown.

“It is very disappointing to know this has happened and I hope the citizens realize that our gardeners have paid for the plots,” Carol Allen, president of Ironton in Bloom, said. “It is not open for others to come and take what they want without permission.”

The reason for not supplying each gardener with his or her own key to a locked garden was simply logistics.

“It is easier than trying to get 30 keys,” Allen said. “That may be what we have to do. We may have to increase the cost of the garden by $5 for protection.”

Allen questioned the motivation behind some of the harvesting.

“The beans may have been eaten but a green tomato is more of a malicious act, unless they were pretty big tomatoes,” she said. “That is more malice.”

Last summer some of the large flower pots and hanging baskets that IIB puts out each summer were vandalized. This year, however, one attempt to repeat that was thwarted by a Good Samaritan, who stopped two juveniles cutting up a pot of cannas with scissors.

“We asked people to keep their eyes open about who could be doing the damaging,” Allen said. “She saw someone tearing up a pot. She told the kids to stop, then she called the police and then called me. It was just sport for them. But people had ownership within the community and did something. That is what we really want. We want people to take care of (the garden) and people to look out for it.”

Prison time and hefty fines were the sentence for a man accused of selling stolen items at the Proctorville Flea... read more