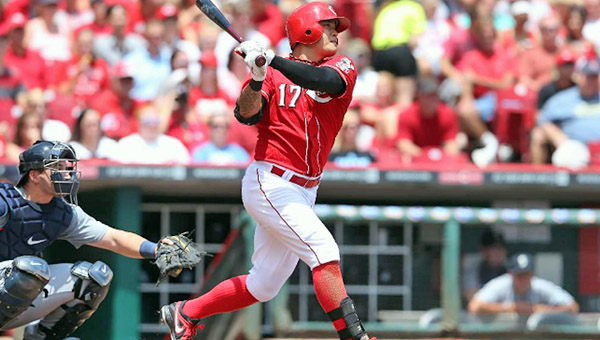 The playing status of Cincinnati Reds’ centerfielder and leadoff hitter Shin-Soo Choo is uncertain for Friday’s game against St. Louis. Choo suffered a sprained ankle on Sunday and has had limited playing time in the past three games. (Photo Courtesy of The Cincinnati Reds)

CINCINNATI — This is a big series for the St. Louis Cardinals.

This is a HUGE series for the Cincinnati Reds.

Both the Reds and Cardinals need to come away with at least two wins — preferably three — when the teams hook up this weekend, but it may be even more critical for the Reds who can’t afford to fall any further behind in the National League Central Division standings.

Crafty right-hander Bronson Arroyo will be called upon to stop a Cardinals’ team that is 7-3 against the Reds this season. Seven of the games have been played in St. Louis.

Arroyo is 8-15 with a 4.49 earned run average in 36 career games against the Cardinals that includes 34 starting assignments.

On the season, Arroyo is 9-8 with a 3.26 ERA. He has stuck out 76 but walked just 25 in 138 innings pitched. In his last start on Saturday against the Los Angeles Dodgers, Arroyo went 5.1 innings and gave up three earned runs and eight hits.

The Reds may be without centerfielder and leadoff hitter Shin-Soo Choo who is recovering from an ankle sprain suffered while stealing second base on Sunday in Los Angeles.

“It’s a lot better,” said Choo. “Being off (Wednesday and Thursday), I’m positive that I will feel much, much better. I don’t want to make it worse. I can sprint with no problem and change direction. Hitting, I felt a pinch in my ankle. I’m a little sore and my timing is different. It’s not normal.”

St. Louis will be without catcher Yadier Molina who is on the 15-day disabled list with a sprained right knee. Molina has started 93 of the Cardinals’ 105 games and is second in the league with a .330 batting average. He is also among the NL leaders with 30 doubles.

Both teams come into the series in somewhat of a slump. The Reds beat San Diego 4-1 on Wednesday to snap a five-game losing streak. The Cards win on Thursday came after four straight losses to the Pirates. They also lost three straight to Atlanta in their previous series for a seven-game losing skid.