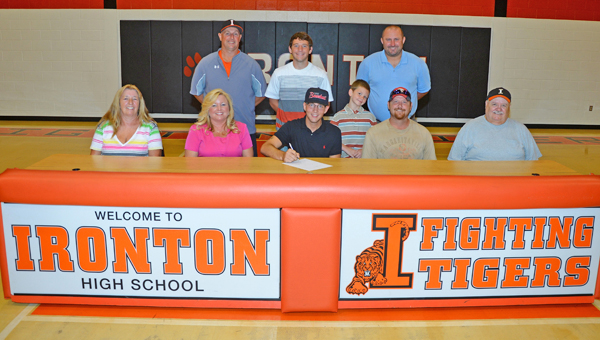 Steven Easterling will never be confused with such pitchers as 6-foot-10 Randy Johnson.

Well, at least not in size.

But despite his diminutive frame of 5-foot-8, 160-pounds, Easterling can be just as dominating as the more physically intimidating figures.

And if opposing hitters look at him and get comfortable when they step in the batter’s box, it doesn’t take long to realize that size doesn’t matter.

The Shawnee State University baseball coaches certainly feel that way as they signed the Ironton Fighting Tigers’ senior standout to a letter-of-intent to play for the Bears.

Easterling — a four-year starter — posted impressive numbers and earned all-district honors by the coaches’ association the past three seasons.

Easterling drew all the tough pitching assignments his senior season and finished with a 4-4 record but a had a microscopic 1.24 ERA with 88 strikeouts and a mere 11 walks. He posted a .324 batting average with eight doubles, a triple, a home run and 13 RBIs batting at the top of the order.

“He is very talented,” said Goodwin. “Pitching-wise, he throws between 83 to 89 miles an hour. He needs to learn a slider and a change-up. But he’s a good catcher and shortstop, too.”

Goodwin said Easterling caught in the sectional semifinals against Coal Grove “and they didn’t even move.”

Easterling would be open to the idea of catching.

“Catching, I did that always since little league. I really didn’t start pitching until my eighth grade year and built up. I had to work hard and I had a lot of good coaches,” said Easterling.

As of now, Shawnee State plans to look at Easterling first as a pitcher.

“He’s just good all the way around. He needs to gain a little weight, get in the weight room and get on the program Shawnee State has. They do a lot of running and hill work. I think he’ll build his lower body and increase his velocity. Who knows, maybe in two or three years he’ll be able to play at the next level.”

“To be honest, we think he has a chance to be a special player. I think he’ll have the chance to come in and help us out on the mound right away. It’s to be determined whether he’s a bullpen guy or a guy who’s going to be in the rotation. I suspect as a freshman he’ll swing a little bit between the two,” said Moore.

“We love his stuff. His stuff speaks for itself, so I think that’s going to play in the Big South Conference.”

Although he received high praise from Moore and Goodwin, Easterling is confident of his chances to play but he knows that nothing will be handed to him.

“I feel like I can come in and help, but I have to work hard. It’s mostly about the hard work and dedication I have for baseball. But I think I’ll be able to do it,” he said. “I just want to play my freshman year and play all four years.”

Easterling talked with several schools including Alice Lloyd and Union College before settling on Shawnee State.

“I want to stay close to home and hopefully get my friends and family members to come and watch me. It’s a good college. They’re going to give me a great education.”

Easterling said he is considering computer technology as a major but currently remains undecided.

Steven is the son of Pamela Stacy and Steve Easterling. His grandfather, Freddie Easterling, was a member of the Ironton’s 1972 Class AA state baseball championship team.

“Baseball has been my love. I want to say ‘thank you’ to my parents because they gave me the ability to do that,” said the younger Easterling.

CINCINNATI (AP) — The weekend started badly and ended worse for the Cincinnati Reds, who sense that something is starting... read more