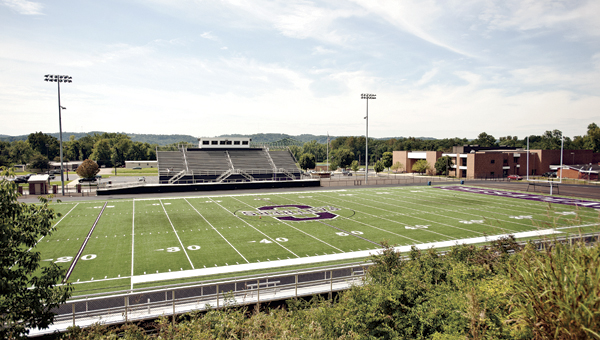 CHESAPEAKE — The long-awaited athletic complex at Chesapeake High and Middle schools will be open for its first season of sports this month.

“Everything is completed except for the striping of the track,” board member Carl Lilly said. “The field is being used by the Buddy Football League and practice for the high school and we will be playing our games on it this year. Everything is going real well. We are tickled to death with it. It’s been a rough year, but things have smoothed out.”

Replacing the more than 50-year-old football field and track with a modern complex for football, track and soccer was begun two years ago. Design work was by MSA Architects out of Cincinnati. Total cost of the project was $3.5 million.

“We had so many hardships to try to get it done,” Art Suiter, board president, said. “We had issues that came up that nobody expected but we worked through them.

One such problem was having to remove the majority of dirt from the field before the crews could begin laying down the turf.

“They had soft areas where they had to dig up the dirt and put in better dirt,” Suiter said. “That was 60 percent of the field. That was $450,000 that we didn’t account for.”

On Aug. 30 at 6:30 p.m. there will be a dedication of the facilities building with dressing rooms and concession area to long-time educator, Grover Joe Smith, who died in 2009.

“He started as a teacher and was also a coach and was principal for many years,” Suiter said. “He was such a good friend to so many people in the community. We all respected him. He had a magnetic personality.”

Family members of Smith are expected to be at the dedication and will unveil a plaque at the site.

“I hope the community is happy (with the stadium). The community paid for it,” Suiter said. “I hope they are excited about it too.”

Also at the district, the preschool classes for 3, 4 and 5-year olds will be moved into the Chesapeake Elementary School. For several years those classes have been housed in modular units attached to the Chesapeake Community Center.

“We had a teacher who retired and it was not necessary to replace that curriculum,” Superintendent Jerry McConnell said. “We had wanted to do that for some time, wanted the preschoolers to be in the elementary building. It is going to be a wonderful thing not only for the students, but the parents and staff.”

Investment program may be way to get cruisers

Lawrence County Commissioners are looking to the county’s Neighborhood Investment Program as an option to fund five new cruisers for... read more