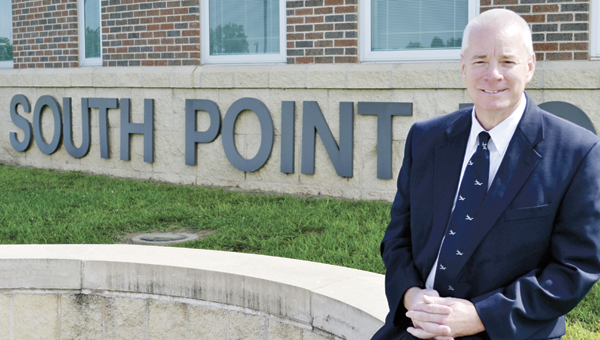 SOUTH POINT — In one capacity or another Mark Christian has spent the past 22 years as one of the top cheerleaders for the South Point school system.

Whether in the classroom or as an administrator Christian has always had one goal in mind for the children in the South Point district.

“To reach their potential,” he said. “To reach whatever they want to be. To provide them with the tools to get what they want in life.”

Since July Christian, who is also a South Point High School graduate, has added a new dimension to that mission, taking over the reins of the school district as its latest superintendent.

“It’s rewarding,” he said. “There are times you go home dragging. But it is the toughest job you will ever love.”

Christian understands reaching one’s potential doesn’t always come about from a direct route.When he was at South Point High, college was the farthest idea from his mind.

“When I was in high school, I couldn’t wait to get out to get an industry job,” Christian said.

So for the next 13 years he worked at the CSX Car Shops in Raceland, Ky., first as a welder and then nine years as a foreman. But it was a work environment that could go from high to low too quickly.

“At the car shops, when you had big orders, you worked,” he said. “And when you didn’t, you were laid off.”

During one of those layoffs Christian went to work at the Nationwide Auto Parts store in Ironton, where some of his colleagues encouraged him to go back to school.

Soon Christian was taking classes at the Ohio University Southern studying elementary education. After graduation Christian got his first job teaching at his alma mater, South Point Middle School, where he taught special education and math. While there, he went back to Ohio University to get his master’s degree in educational administration.

Then he took on the post of assistant principal at South Point Elementary, then principal at Burlington Elementary before being named assistant superintendent for the district, a post he had for seven years.

While assistant superintendent, Christian worked towards creating a flexible program for special education students, monitoring them to see when they could be mainstreamed and when they should be in their own classroom.

“Instead of this black and white,” he said. “We had a continuum where kids could move from place to place based on their ability.”

Now as the leader of the district, Christian sees his job as one of maintaining a sense of unity.

“I have been in South Point all my life,” he said. “I am a lifelong resident of South Point. I know these people. I live with them, all the parents. When you have to call a parent about something, they know you will give it to them straight. For most, people seem to trust you when they have known you all your life.

“I am really honored and privileged to have this job. It is a great opportunity to affect kids’ lives. We can make a difference with kids.”

With four Ironton City Council seats up for grabs this November, only three petitions were filed by Wednesday’s deadline and... read more