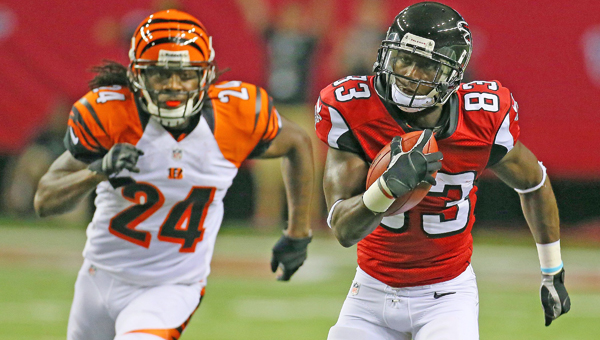 ATLANTA (AP) — Two Bengals newcomers showed they can provide offense to help the team as it chases an elusive postseason win.

Giovani Bernard scored in his opening bid for a share of the Bengals’ carries, Josh Johnson led two second-quarter touchdown drives, and Cincinnati rolled to a 34-10 preseason win over Atlanta on Thursday night.

Bernard, a second-round pick from North Carolina, played behind returning starter Benjarvus Green-Ellis and had 10 carries for 28 yards, including a 1-yard touchdown run. He added three catches for 16 yards.

Some observers expect Bernard and Green-Ellis to share the job this season.

“We’ll complement each other really well,” Bernard said. “I think people got a little taste of it tonight.”

The Bengals are coming off a 10-6 season and their second straight loss in the first round of the playoffs. Their last playoff victory was in the 1990 season.

Johnson made big plays as a passer and runner as he opened the competition with John Skelton for the Bengals’ backup quarterback job behind Andy Dalton. Johnson passed for 100 yards, including a 21-yard touchdown to Brandon Tate, and ran for 64 yards.

“I was impressed overall with what he did out there,” said Bengals coach Marvin Lewis of Johnson. “We know he can make plays with his legs, but throwing the ball is how a quarterback has to make a living in this league, and it was a real nice play to Brandon Tate.”

Johnson led the Bengals to 17 second-quarter points and another field goal in the third quarter.

“I played pretty well,” Johnson said. “I was able to move the ball.”

Lined up deep in the I-formation, Bernard showed his explosiveness by quickly building his speed even before taking the handoff from Johnson and then running straight ahead for the touchdown with 2 seconds remaining in the half.

Dane Sanzenbacher had a 71-yard punt return for a touchdown and a 36-yard scoring catch from Skelton.

The game highlighted the Falcons’ concerns about their rebuilt offensive line. Jackson found little blocking as he had five carries for only 8 yards.

Atlanta lost projected starting right tackle Mike Johnson, likely for the season, when he dislocated his left ankle and broke his left leg in Tuesday’s practice.

Lamar Holmes, a second-year player who appeared in only one game in 2012, moved up. Undrafted rookie Ryan Schraeder played behind Holmes. The Falcons released right tackle Tyson Clabo after the 2012 season and longtime starting center Todd McClure retired.

Coach Mike Smith said it’s too early to determine if the team needs to look for help on the line.

The Falcons had a fast start. Matt Ryan was 3 for 3 for 52 yards on Atlanta’s opening drive, his first with Jackson at running back. Jackson, the former Rams standout, was signed to replace Michael Turner.

On the first play of the game, Jackson ran straight ahead, found no room and cut right for 4 yards. It was his longest run of the night, but Ryan insisted it was a good beginning.

“I thought he did great,” Ryan said. “For all that we have in and all that we’ve put in as an offense, for him to pick up everything and to be out there and run the ball the way he did, I’m excited about what he’s going to bring to the team this year.”

Harry Douglas turned a screen pass from Ryan into a 42-yard gain, but the drive stalled when Geno Atkins stuffed Jackson on third-and-2 run from the 16, forcing the Falcons to settle for Matt Bryant’s 37-yard field goal.

Dalton played only two possessions and went 3 of 7 for 36 yards.

Dominique Davis, mostly ineffective after replacing Ryan in the first half, led a third-quarter touchdown drive capped by his 8-yard pass to Jason Snelling. Davis hit 8 of 19 for 78 yards with one touchdown and one interception.

Skelton took over for Johnson late in the third quarter and led a 78-yard touchdown drive finished off with his 36-yard scoring pass to Sanzenbacher, a third-year player who had only one catch in 2012. He completed 4 of 5 passes for 72 yards.

NOTES: Bengals CB Brandon Ghee, who intercepted a pass from Davis in the second quarter, left with a head injury. … Bengals G Tanner Hawkinson was carted off the field midway through the fourth quarter with an ankle injury. … Falcons TE Tony Gonzalez, participating in only portions of training camp as part of his agreement to postpone his retirement, was away with his family. … Bengals DT Larry Black, who dislocated his right ankle during practice last month, cleared waivers and was placed on injured reserve.

COLUMBUS (AP) — Safeties are the players farthest removed from the action. Yet they’ll be in the middle of Ohio... read more