Local leaders get inside look at industrial park 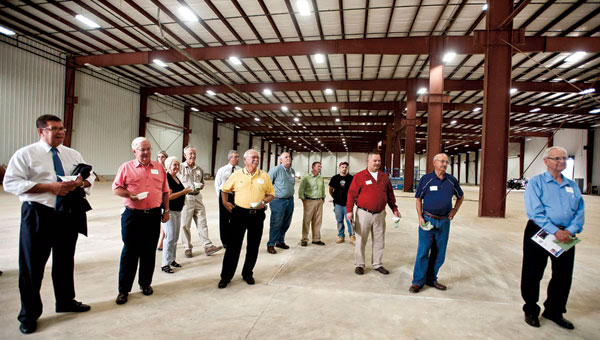 Visitors gather inside the new Orica building as part of a three-business tour at The Point industrial park Friday.

SOUTH POINT — Getting an inside look at what The Point industrial park is all about was the focus of a progressive lunch held in conjunction with the semi annual meeting of the Lawrence Economic Development Corporation.

“We’d like you to see what is going on in these buildings and meet the leaders of each of these buildings and know what they do,” Dr. Bill Dingus, executive director of the LEDC, told an audience of business leaders and city and county officeholders on Friday.

Starting at Engines Inc., those in attendance toured that facility followed by at tour of Intermountain Electronics, the latest tenant at The Point, ending at Orica, the mining-affiliated manufacturer at the latest building under construction at the industrial park.

Dingus said creating jobs for families is an important function of the LEDC.

However, often there are jobs and yet there are not people with the proper training.

Eliminating that dilemma is the purpose of the Ohio Strategic Training Center that recently added a welding component to its curriculum.

“And we are working with the schools to help them do a better job,” Dingus said.

The main facility for Engines Inc. can be found at The Point and is a diversified manufacturer focusing on the railroad and forklift industries.

“We build the chassis for the largest forklift in the world,” Carl Grover, president of Engines Inc., said. “We have one of the largest fabricating facilities — equipment-wise — east of the Mississippi.”

Recently, Intermountain Electronics, a Utah-based manufacturer of power distribution equipment for mining, oil and gas industries, opened up an operation at The Point.

The global company, started almost 30 years ago, is a family-owned operation.

There are eight facilities in the United States and one in Mexico.

By mid-September the building for Orica, formerly Minova, is scheduled for completion. The manufacturer of roof supplies for the mining industry expects to hire 110 employees in its first year with the figure increasing to 145 in three years.

Once the debris is removed, the site will be turned into a pocket park and veterans memorial. A once-great Ironton... read more