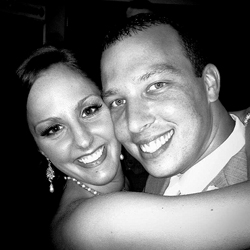 The bride was escorted by her father.

Maid of honor was Ashley Shepherd, best friend of the bride. Bridesmaids were Brittany Brunty, sister of the bride; Lanena Ruggles, Emily Ruth, and Chelsey Tackett, friends of the bride and junior bridesmaid Zoee Oskin, cousin of the bride.

Best man was Brad Petry, brother of the groom. Groomsmen were Kevin Conners, George Cost, Thomas Crabtree and Lucas Hose, friends of the groom, and junior groomsman Michael Hall, cousin of the bride.

Flower girls were Mia Boothe and Bethany Hacker, cousins of the bride.

Guest book attendant was Ethan Crabtree, friend of the bride and groom.

A reception was held at the Knights of Columbus. Dinner was catered by Joy Coffman.

The bride graduated from Fairland High School and Shawnee State University. She is a radiologic technologist at Thomas Memorial Hospital.

The groom graduated from Moorefield High School and Collins Career Center and Marshall University. He is a radiologic technologist with Quality Mobile Imaging.

The couple honeymooned in Pigeon Forge, Tenn. They reside in Chesapeake.

Jackie Heighton and the late Robert Heighton announce the engagement and forthcoming marriage of their daughter, Jacqueline Nicole Heighton, to... read more