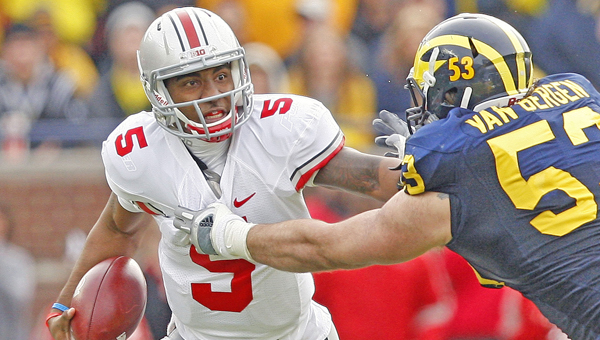 Ohio State Buckeyes’ quarterback Braxton Miller tries to escape the grasp of a Michigan defender during a game last season. Miller said he is doing a better job of handling the spotlight this year. (MCT Direct Photos)

COLUMBUS (AP) — Braxton Miller didn’t make any headlines during the offseason, at least not for anything he did off the field.

The Ohio State quarterback has been under a microscope for the past two years, ever since he first took over as the Buckeyes’ starting quarterback.

About the last thing he wants to do is be a focal point for what he does on his own time.

“Oh, no. I try to stay out of all that stuff. I’m good on that,” he says, when asked if he learned anything from all the travails Heisman winner Johnny Manziel went through in his private life this past offseason.

Miller is a celebrity, make no mistake about that. He’s downright famous around Ohio. But he has no intention of letting that change who he is.

“I’ll just be the same guy I am right now, humble and talking to you guys,” he said, an average 20-year-old kid surrounded by maybe 100 reporters and photographers hanging on his every word. “When I leave here, I’m just like a regular person. I’ll just keep it level-headed and go about my business when I go on the field. When I leave the field, I’m just this … guy.”

The junior says he doesn’t mind all the attention, even though almost everyone would classify him as soft-spoken bordering on shy. At the very least, he’s grown used to being sought out by fans and media. It comes with putting up these numbers: 1,271 yards rushing, 2,039 passing and 28 total touchdowns.

His teammates notice the change in him.

“That’s a really cool thing to see out of a guy that’s a superstar talent,” offensive lineman Jack Mewhort said. “I tell people all the time, his best quality is his humility. He’s not one of those guys who’ll be in the headlines. That’s really a cool thing as a quarterback, especially a guy of his caliber.”

Now, with Ohio State on the cusp of what could be a memorable season, the junior is trying hard to be a more forceful leader. He may never be the guy who gets in a teammate’s grill and chews him out, but there’s no reason why he can’t get other players to produce just because he plays so hard and wants to win so badly.

It’s been a bit of a struggle to get Miller to be more assertive but he’s making progress.

“He’s never been a bad guy, he’s always been a great guy,” coach Urban Meyer said. “But now he’s got a little confidence to him. I call (quarterback) the most unique position in sport, where you’re allowed to be a little introverted but you have to be able to lead. I don’t want to give him an A yet, but he’s pushing A work.”

“I think he was and still is and will continue to be a tough nut to crack,” Herman said. “He’s very guarded, as has been well documented. He’s a very introverted person. That’s not bad; none of that is bad. But it lends itself to a much tougher job for a guy like me to come in and say, ‘Hey, since high school I’m your fourth offensive coordinator in four years or whatever the case may be and, oh by the way, you’ve got to trust me 100 percent.’

“It takes time. Trust is earned, it’s not just given.”

There is no question that his teammates respect Miller. They see how he applies himself, the extra time he puts in, how much he cares.

“He’s more mature, he’s more of a leader, he’s more vocal,” running back Jordan Hall said. “He was one of our hardest workers in the offseason, too.”

Miller is considered one a handful of top candidates for the Heisman Trophy.

It wasn’t so long ago that the Ohio State signal-caller might have dreaded facing the prospect of the interminable national spotlight that comes with a Heisman campaign.

Now, he may not welcome it, but at least he’s at ease. He trusts others to make it as effortless for him as possible.

“Coach Meyer does a good job about that (Heisman talk),” Miller said. “He always tells us how good we are, how bad we did this day and blah blah blah.

“We have to keep the momentum how it was last year, just keep that going. All the things that are going on outside of the (practice facility), you can’t pay any attention to that stuff.”

MILWAUKEE (AP) — Three of Tony Cingrani’s 15 starts have come against the Brewers, and he knows Milwaukee can’t lay... read more