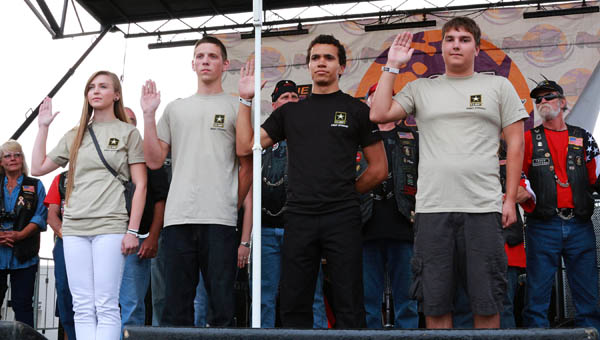 our local teenagers took the oath of enlistment Saturday during the Vietnam Veterans Tribute. This was part of the annual Parade of Heroes that included hundreds of motorcycles and veterans who came to show their respect for their fallen brothers and sisters.

Organizers of the annual Vietnam Veterans Tribute that always takes center stage at the Rally on the River on the last night of the event had a surprise for the audience Saturday.

Four recruits stood on the Planet Stage in the middle of the rally headquarters at Depot Square to take the oath of enlistment to become U.S. Army soldiers.

“You are going to see something you have never seen before,” Ted Riedel, a member of American Legion 433 and chair of the Moving Wall committee, told the audience. “Three young men and one woman will be sworn into the U.S. Army.”

At that announcement the crowd by the stage erupted into applause and cheers.

“They walked in as civilians and they will walk out as members of the U.S. Army,” Riedel said. “The military doesn’t usually do this out in public.”

They were joined by Capt. Bryan C. Bolin, company commander of the U.S. Army Recruiting Company in Charleston, W.Va.

“This is a humbling experience to come up here,” Bolin said.

Then the commander simultaneously swore in the four recruits.

After the ceremony Bishop, 20, said he joined the Army to follow in the footsteps of his parents and grandparents.

“Everyone in my family has been in the military,” Bishop said. “My mother was in finance in the Army. My Dad was a medic.”

On Oct. 29, Bishop is off to Fort Benning, Ga., for basic training.

“This is more a feeling of pride and humbling to be part of it,” he said.