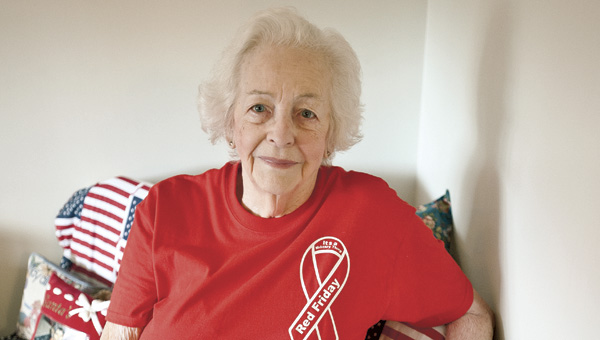 Ironton resident Hilda Davidson, a lover of the red, white and blue, shows off her Red Friday shirt. Hilda is asking area residents to wear red on Fridays in support of the troops.

There is an American Flag ribbon on the door of Hilda Davidson’s residence at Sherman Thompson Towers. But once inside her impeccable one-bedroom apartment, family mementoes and flags is the only two items of décor with which she is concerned.

“I’ve just always loved and respected the red, white and blue,” she said. “I’ve been around a long time and seen a lot of things. The more I experience, the more I love my country.”

Davidson will turn 90 in October. Although she never served in the military, she feels the armed forces still had an impact on her. When she read a short article in Guideposts magazine about a group of people in Crescent, Penn., wearing red on Fridays in support of our troops, she felt it was the right thing to do.

“I stopped in a shop here in town and I bought two red shirts,” she said. “I gave one to Margie (Collins) and I kept one. We had our first red Friday last week and a man thanked Margie for wearing her shirt.”

A small couch in the corner of Hilda’s apartment is covered with a red, white and blue afghan, and three American Flag-colored throw pillows are neatly placed along the seating area. One pillow has a picture of her dog that recently passed away. In the picture, her dog’s scarf is an American Flag.

“I have lived through the Great Depression and lots of wars,” she said. “When I was in school I loved history, and that was back when history was really taught. I really thought I would go into the service, but then I got married.”

When the United States was on the brink of entering what became World War II, Hilda was certain her husband was leaving to fight.

“I didn’t even iron his clothes that week, I just folded them,” she said. “He had already passed his exams and everything, I was sure he was leaving.”

The federal government deemed her husband’s job at Dayton Malleable Iron Company as essential, however, and he ultimately was not enlisted in the military.

Hilda’s son, who died five years ago, tried to enlist three separate times but doctors denied him each time because he had ALS, more commonly known as Lou Gehrig’s disease.

Hilda had an uncle who fought in World War I and a maternal grandfather who battled in the Civil War.

“Even without my family ties to the military I still think I would feel as strongly as I do,” she said. “I have just always been a big believer in and had a tremendous amount of respect for my country.”

Hilda is not a person who looks for just any cause. She has always felt this way about her country and a campaign flyer from her race for Ironton City Council in the early 1980s is red, white and blue and a flag is affixed in the bottom right-hand corner. She also attended a Purple Heart Convention in Tampa, Fla., a few years ago.

Only one red Friday has passed at Sherman Thompson Towers and Hilda hopes participation among her neighbors and the rest of the community will grow.

“There are so many people who don’t get involved in anything and they could add a lot if they would,” she said. “I think as this effort goes on, we’ll be seeing more and more red on Fridays.”

Whether it was an increase in patrols or a more subdued crowd, city and county law enforcement offices say this... read more