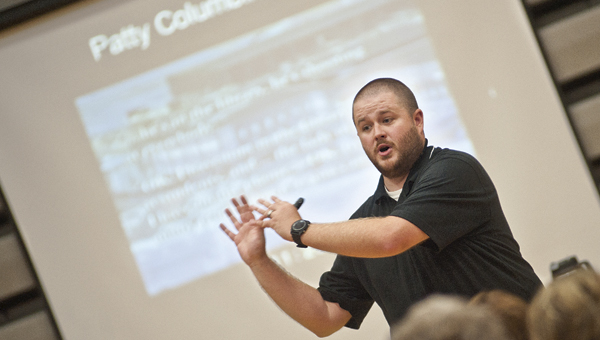 PEDRO — “Get on the ground, get under the tables!”

Columbine High School librarian Patti Neilson yelled that phrase repeatedly when she saw one of the gunmen in the 1999 school shooting walk past her doorway.

James Burke, a law enforcement training officer from Ohio Attorney General Mike DeWine’s office, was at Rock Hill High School this week to educate faculty and staff on what to do in the event something like this occurs in Lawrence County.

“This training will benefit anyone who participates in it,” Wes Hairston, Rock Hill Superintendent, said. “Obviously we hope it’s something we never have to deal with, but if we do, we’ll be prepared.”

Burke played a 911 tape of Neilson’s call and used it as a teaching tool.

“You have got to be prepared for it,” Burke told the group. “We don’t have the ability to make quick, wise decisions when faced with a situation like a school shooter. When put in these situations, we revert back to our training.”

Burke added that if the ability to handle a certain situation has not already been discussed, the ability wouldn’t be there when a situation arises and used the Columbine and Virginia Tech situations to show the group how the shooters planned their attacks.

“Seeing signs and identifying a shooter prior to an incident is one of the most important factors,” Burke said.

Burke said the method of dealing with the shooting at Columbine was to contain the building and call SWAT. With response times at 45 minutes to an hour, however, those tactics are starting to change.

“Response time is an issue,” he said. “When the shooter opened fire at Virginia Tech, he shot 174 rounds in 11 minutes.”

“Many departments are moving away from the ‘contain and call SWAT’ method to ‘first officer there opens the door and goes’ method,” he said.

With 95 percent of shooting incidents involving only one shooter — when more than one they rarely get beyond eyeshot of one another — movement and distance will drastically decrease one’s chances of injury.

“The situation will dictate what the best reaction option is,” Burke said. “We must address a variety of options when an ‘active shooter’ starts on a rampage.”

Burke said some of the best ways to prepare is to conduct training sessions to test procedures, field-training exercises and to develop a memorandum of understanding between the facility and police.

“The No. 1 goal is to protect the lives of children, patrons and staff,” Burke said. “When it comes to whether a facility should lockdown or evacuate, rarely will either be the best option for everyone involved and that’s why we are here today.”

Burke gave everyone in attendance a packet with profiles of shooters and tips about how to recognize a potential shooter.

The façade of Patrick’s Country Store in Deering is indicative of owners Teresa and Joel Patrick’s intention to do business... read more