Other Buckeyes must carry load 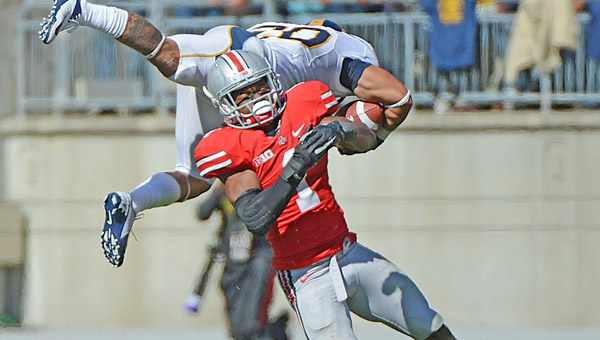 Ohio State defensive back Bradly Roby upends California Golden Bears running back Isi Sofele (20) during a game last season. Roby has been suspended along with two other players for the Buckeyes’ opening game Aug. 31 against Buffalo. (MCT Direct Photo)

COLUMBUS (AP) — While Armani Reeves spoke to a semicircle of reporters after a recent Ohio State practice, the person he was discussing was about 50 feet behind him seated in an ice bath cooling off after another hot day of work.

The distance was more than a little symbolic.

Bradley Roby, the Buckeyes’ standout cornerback, isn’t doing any talking these days, at least not publicly. He also isn’t even practicing with the first team.

All got into trouble. All are paying a price.

Some fans think it’s a high price since no one was hurt and there were no serious charges. Others believe the matters have been swept under the scarlet-and-gray rug outside coach Urban Meyer’s office.

Players like Reeves will carry the load for the Buckeyes.

“I was always willing to be a hard worker on and off the field,” said Reeves, tabbed to start at Roby’s cornerback spot. “I still learn from the older guys like (Roby). Whether the situation is good or bad I’m just going to take advantage of any opportunity I have and play to the best of my abilities.”

Now, with the opener just over a week away, they must come up with three more replacements.

Hyde will miss the first three games after an alleged assault against a woman. Roby will sit out at least the opener after a skirmish at a bar in Bloomington, Ind. Rod Smith, who was expected to take Hyde’s spot, was benched for the first game after a violation of team rules last winter.

Roby had his misdemeanor assault charge reduced to misdemeanor disorderly conduct, then The Columbus Dispatch reported on Wednesday that the latest charge was dropped on the condition that Roby not face any legal problems in the next year.

“He’ll be suspended one game just because there’s an issue,” Meyer said.

There are worthy candidates — like Reeves — in the wings. But it’s still not the ideal way to go into a season.

Hyde and Smith will likely be replaced by a committee: H-back Jordan Hall, second-year players Bri’onte Dunn and Warren Ball and freshmen Dontre Wilson and Ezekiel Elliott. Wilson has been the talk of camp, with water-bug moves and incredible speed.

“Jordan Hall is a guy who has some playing experience and has been through some adversity, obviously,” running backs coach Stan Drayton said, referring to Hall’s injury-riddled career. “He does have some game experience. … Yeah, I’d say he’s probably the No. 1 guy right now.”

The coaches have heaped praise on the three chastened players, saying they have refrained from sulking and have taken an active role in preparing the players who will take their spots.

“He was wrong. He screwed up. He’s paying a price,” cornerbacks coach Kerry Coombs said of Roby. “He works hard at his craft, he studies film, he takes care of his business and he wants to be as good as anybody in the country. He’s not yet. I don’t find him to be different (this season after the suspension). I find him to be embarrassed and I don’t blame him. But I find him to be a guy who’s going about his business as a pro.”

Against an overmatched Buffalo team that is coming off a 4-8 record in coach Jeff Quinn’s third season, the suspensions probably won’t be noticed. But integrating suspended players back into the lineup in season isn’t easy without ruffling the feathers of the players who filled in for them or stayed away from offseason trouble.

Reeves is excited about the prospect of starting the first game of his sophomore season.

“It means a lot,” he said. “You’d never expect a kid from Boston to be playing at Ohio State. It’s a very different experience and I can’t wait to have all my family and friends to see me on the field. It’ll be fun. It’ll be real fun.”

But Reeves knows that as soon as Roby is cleared to play, he will likely head back to the sidelines.

“Obviously he’s one of the best in the country, if not the best,” Reeves said. “When he comes back I’m still going to do the same thing I’ve been doing all the time and that’s just working hard and helping this team anyway I can.”

CINCINNATI (AP) — Shin-Soo Choo got the Reds offense going early and they opened up a big lead. They needed... read more