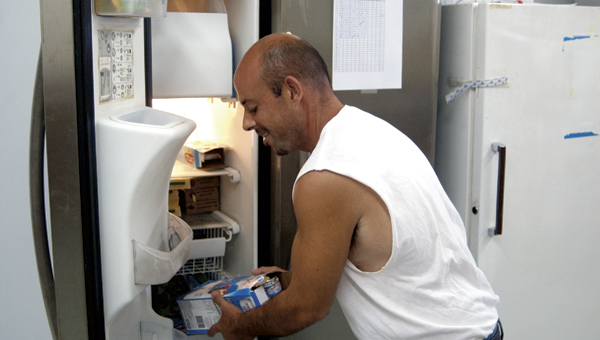 Zack Papalia, a volunteer at the food bank, gets some frozen items out of a freezer to give to recipients.

Diane Porter reaches into one of the oversized freezers in the back room of the Harvest for the Hungry Food Pantry on Fifth Street and pulls out an ice cream bar.

The last Monday of the month has brought out a crowd, all wanting the bags of groceries that will stretch their food budget for a few more days.

“There’s a child out front and I like to give the children some ice cream,” Porter, the pantry director, said.

Soon the recipient of the bar is munching it sloppily, quickly giving himself a chocolate moustache as his mother waits in line.

One thing the young woman won’t be getting this morning is cereal.

“We ran out of cereal,” Porter said. “We’ve been out since Friday. It’s getting a little frustrating.”

Porter took over the food pantry, sponsored by the downtown Ironton churches, in March and has instituted some changes that has meant more recipients and a more technologically savvy way of running the operation.

One change is allowing walk-ins to the pantry that is opened Mondays, Wednesdays and Fridays from 9 a.m. to noon. Before, clients had to be referred by another agency. That has meant more customers.

That equates to 582 families.

“It’s seniors and children,” she said. “That has tripled.”

The main source for the pantry is the food bank in Logan with additional items, when needed, coming from the bank in Huntington, W.Va. Both get their food from the United States Department of Agriculture that determines how much individual pantries receive.

“We want to start evening hours to help the working poor, who can’t take off from work, but not until the USDA increases our allotment,” Porter said.

In about a month the director expects to have an electronic sign-in process set up that will cut down on the waiting time.

“They will show an ID and put in their initials,” she said.

The goal is to expedite service and eliminate the number of recipients crowding around the sign-in table.

Sitting in one of the chairs along the wall is Kaci Dowdy of Ironton who is there with her son, 2-year-old Duane. Coming to the pantry each month is routine for the single mother.

“By the time my food stamps run out, this helps,” she said.

Kaci also likes the new system where referrals are not necessary.

Rains cause more slides and damage