City working to clean up after damaging sewage leak 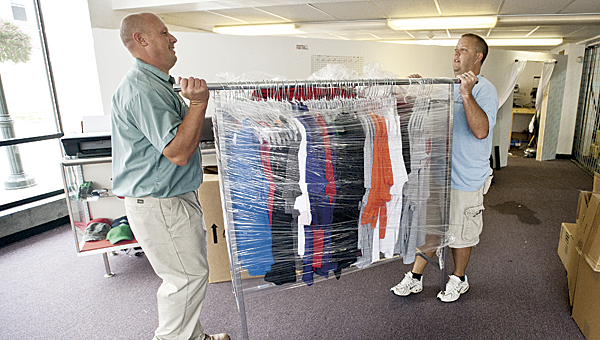 The explanation as to what caused a sewage block at the Ironton City Center was brief. Literally.

Although it was unclear how long someone’s underwear had been lodged in the sewage line, the damage was very much apparent to several retails shops located on the government building’s first floor.

Crews spent Tuesday afternoon clearing the shops of merchandise, moving the products and displays to the lobby of the building after a leak in the sewage line saturated the carpet and some sheet rock. The city police department, located on the first floor, was also affected.

Mayor Rich Blankenship said the blockage was discovered around 3:30 p.m. Monday but crews were not able to clear the lines until Tuesday morning.

“In the meantime it backed up into the retail stores and the police department causing saturation to the carpet,” Blankenship said. “So we have a company in to sanitize and clean it. We are removing the carpet.”

The leak affected about five retail shops that are housed in the building. Blankenship said the shops owners were being understanding of the situation.

Blankenship said it was still unclear the cost of the damages and how long the building will be closed. He made the decision Tuesday afternoon to keep the building closed Wednesday as a precaution.

“We have a lot of carpet and sheet rock to replaced,” Blankenship said.

Servpro is doing the cleanup and carpet replacement.

Until the building can reopen, citizens can pay their utility bills from 9 a.m. to 4 p.m. at the Ironton Fire Department conference room at 526 S. Fourth St.

Students and teachers in the Ironton City Schools district have likely noticed an increase in security with the addition of... read more