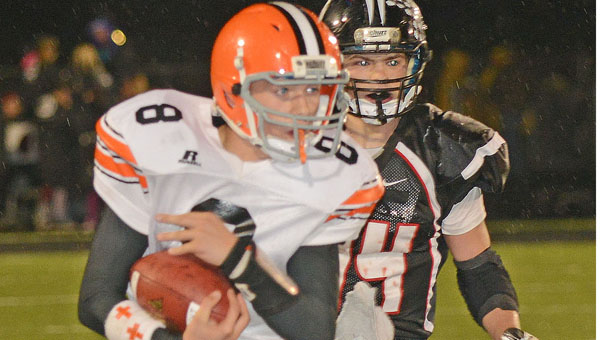 Junior Tristan Cox (8) is one of the many new faces in the Ironton Fighting Tigers’ starting lineup this season. Ironton returns just three starters as they host the veteran Wheelersburg Pirates on Friday in the regular season opener. (Tony Shotsky of Southern Ohio Sports Photos)

Mark Vass is hoping that the Friday Night Lights won’t be too bright.

With one of the youngest and most inexperienced teams in Ironton football history, the Fighting Tigers’ second-year head coach is concerned how his team will react to playing in a varsity game against a quality team when the score counts.

“The scrimmage games are over. We play for keeps from here on out and it’s going to be a challenge for our young guys,” said Vass whose team has just three returning starters.

“Young players tend to get caught up in that deer in the headlight look. They tend to watch the game instead of playing it, and they don’t always react well because they aren’t used to playing at the varsity level where the game moves so much faster.”

The game will not only move faster because it is at the varsity level, but also because Ironton’s opponent in Friday night’s season opener is the Wheelersburg Pirates who employ a no-huddle offense.

Besides offering a different speed in running plays, the Pirates also have plenty of speed once the play begins.

“Both the Millers are good athletes,” said Vass. “The quarterback does a great job of reading the defense on the option and he does a good job with the passing game. The other Miller is a big target. They put a lot of pressure on the defense.”

The running game also has a returning veteran in Tyler Claxon (5-10, 155) and returning starter Cameron Parsley — Eddie Miller’s cousin — can play tight end or shift to the backfield to give the Pirates a big back. Parsley is 6-2, 205.

“Wheelersburg is one of the better teams we’ll play, and that’s saying something because we have such a tough schedule. They have size, speed and a lot of experience and those are all things you can’t teach,” said Vass.

Ironton’s dominance in the series is facing a tough challenge. The Fighting Tigers lead the series 17-5. They have won 11 of the last 15 including four straight.

Wheelersburg has been ranked as high as No. 3 in some preseason polls. Both Ironton and Wheelersburg are in Division V this season as Ohio expanded its postseason playoffs to seven divisions.

Student season tickets: $12 at each school in advance (available for 2 weeks only)

Reds lose once again to Cards