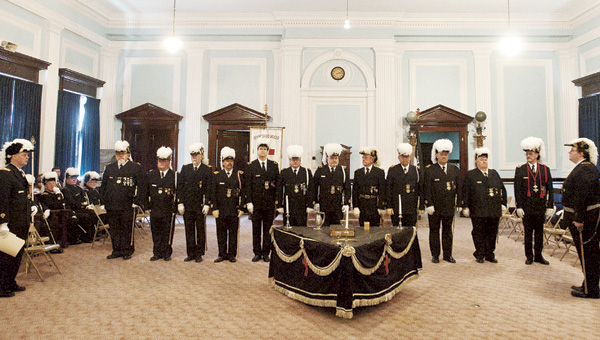 Members of the Ironton Commandery No. 45 Knights Templar participated in the 125th year anniversary.

The Ironton Commandery No. 45 Knights Templar celebrated the 125th anniversary of its charter on Saturday, Aug. 24.

“There are only two chapters older than us,” Dwayne Hall, treasurer and past commander, said. “The Ironton Masons and LaGrange No. 68 are the only ones older than us.”

The group has been through its share of adversity. The building the group called home has caught fire twice, once in 1888 when it was partially damaged, and again in 1915 when it was destroyed.

“All records and furnishings were completely destroyed,” Hall said. “A new building was completed in 1917 and dedicated in 1918.”

Past notable members of the Ironton Commandery include Congressmen, civil war generals and former Ohio Secretary of State and candidate for governor Carmi A. Thompson.

Earle Stewart was perhaps the Commandery’s most notable member. He served as a member of the Ironton City Charter Commission in 1914, was elected Mayor of Ironton in 1921, the Ohio House of Representatives in 1924 where he served as chairman of the House Finance Committee. Outside of politics, Stewart was manager of the Ironton Coal and Iron Company, treasurer and trustee of the Charles S. Gray Hospital, was a “Four Minute Man” during World War I, director of the First National Bank and was president of the Ironton Chamber of Commerce. He went on to serve as Grand Master of the Grand Lodge of Ohio in 1925.

The commandery’s actual anniversary is today.

Preview event set for Saturday   An eccentric war hero with a record that makes him the second-ranking American ace... read more