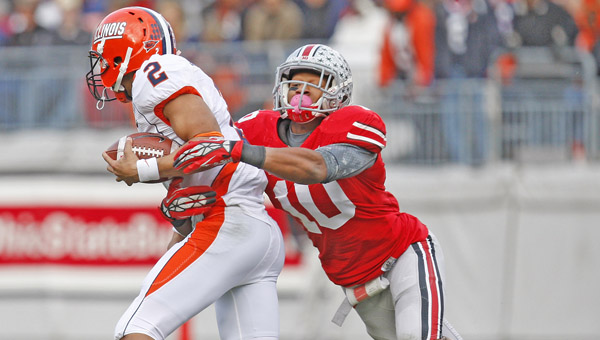 COLUMBUS (AP) — There was a time not so long ago when Ohio State’s defense was one of the most feared, effective and efficient units in the country.

For this season’s second-ranked Buckeyes to contend for a Big Ten, let alone a national title, coach Urban Meyer knows his defenders have to harken back to the not-so-distant past.

“One thing about Ohio State defense, for a decade they were about as good a defense as there was in America,” Meyer said. “The last two years, it hasn’t been that way. So I’m anxious to get it back there to the Ohio State level.”

The defense was just good enough to get it through an undefeated season in 2012.

It provided the Big Ten defensive player of the year in lineman John Simon and always seemed to come up with a big play when needed.

No one thought it was a bad defense, but the numbers weren’t very good: 360 yards and 23 points a game, including surrendering 512 yards to California, 481 to Indiana and 403 to UAB.

When they host Buffalo on Saturday, the Buckeyes are seeking improvement despite missing eight starters (including suspended starting cornerback Bradley Roby) on that side of the ball.

There’s a lot to accomplish.

“Right now we still have a chip on our shoulder,” said All-Big Ten linebacker Ryan Shazier, one of only three holdover starters. “Some people don’t feel like we are worthy to be where we are right now (in the rankings). We’re fighting for championships in November right now.

“We plan on being the best in the Big Ten.”

The new first-teamers include four sophomores and several juniors who have little experience in a big-game spotlight. So there’s a lot to prove — even to the coach.

“The jury is certainly out,” Meyer said. “I’m very comfortable with who they are as people and the way they practice. However, there’s nothing to gauge it upon other than practice. So how (do) they operate in a game? I’m really excited.

Acclaimed sophomores Adolphus Washington and Noah Spence get the call at the ends, with Michael Bennett at tackle and Joel Hale edging out Tommy Schutt at noseguard.

The linebackers alongside Shazier are Curtis Grant in the middle and Joshua Perry on the strong side.

“There’s a lot of guys in that front seven that we have high expectations for,” co-defensive coordinator and linebackers coach Luke Fickell said. “But until they do it in front of 107,000 people, we’re still going to sit here a little anxious to see what they can do. We really have liked what we’ve seen so far, and the upside is incredible.”

Meyer said he’s concerned about the depth and quality at linebacker, a spot that he calls a concern on the cusp of the new season.

The secondary includes rock-solid safeties C.J. Barnett and Christian Bryant, with Armani Reeves and Doran Grant at the corners.

“Our intent would be to be better than last year,” cornerbacks and special-teams coach Kerry Coombs said. “We’ve got a lot of young players who are going to play really, really hard.”

Beyond just beating Buffalo, the defense has set some lofty goals in the opener.

“We probably want to just leave a great impression on the world,” Barnett said. “We want to be one of the best defenses in the country, so hopefully we can make strides toward that goal in this game.”

The names have changed, but the staff’s second year with even the young players means the defense can do more things.

“I think we’re going to be a faster defense and hopefully more aggressive as we grow in our scheme. And we’ll have more pressure packages,” Meyer said. “Last year we started the season as kind of a bend-but-don’t-break defense where it seemed we were always on heels. That’s not the kind of defense that anyone wants.”

Every team is optimistic before the games begin. But the Buckeyes’ defenders feel they are almost entitled to something better.

“Last year we had to work through some guys having doubts,” Bennett said of the flux that came with a new staff. “But this year everyone’s bought in, everyone’s more excited and you can see that light at the end of the season that if we do everything right it’s not just 12-0 it’s … big things can happen.”