Louisville too much for Bobcats 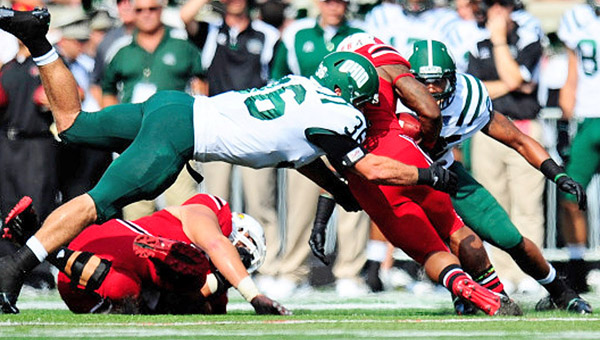 Ohio Bobcats’ linebacker Ben Russell (36) dives to make the stop of a Louisville running back during Sunday’s game. Russell made the tackle but the Bobcats lost their season opener to the No. 9-ranked Cardinals 49-7. (Photo Courtesy of Ohio University Sports Information)

LOUISVILLE, Ky. (AP) — Ohio quarterback Tyler Tettleton and running back Beau Blankenship had seen everything in their first three seasons with the Bobcats except a loss in a season-opening game.

That streak ended at four Sunday as No. 9 Louisville rolled to a 49-7 win.

“We didn’t give them much resistance, but the way they played, the way they executed, the quality of athlete that they’ve got — I think it’s definitely a top-10 team,” Bobcats coach Frank Solich said. “Certainly, I think it’s the best overall team since I’ve been at Ohio that we’ve played.”

Ohio (0-1) beat Penn State 24-14 to open last season but an upset over Louisville would have been on a much bigger scale. The Cardinals (1-0) are expected to be a part of the BCS national championship picture, and quarterback Teddy Bridgewater entered the season as a potential Heisman Trophy candidate.

The Bobcats had hoped to hang with the Cardinals with their offense. That didn’t happen.

Ohio went three-and-out on its first two possessions, and the third drive ended after six plays with an interception on third and 16. The Bobcats were down 21-0 at that point.

“We knew they had a great offense, and we felt like that to keep up with them, we’d probably have to score almost every possession,” Tettleton said. “It’s just one of those days that we weren’t clicking. Give a lot of credit to them. They have a really good defense.”

In contrast, Bridgewater had Louisville up by two touchdowns before he threw an incomplete pass.

He hit his first nine passes and matched a career best with five touchdown throws.

Bridgewater kicked off his Heisman Trophy campaign by going 23 of 28 for 355 yards. Damian Copeland and Kai De La Cruz each caught two touchdown passes and DeVante Parker and Robert Clark each had one.

Michael Dyer, the former Auburn star, debuted for Louisville and broke off a 46-yard touchdown run in the third quarter.

Like last season, Bridgewater involved many targets in the offense and found them wide open much of the day.

Parker was at least 10 yards past a defender when he caught a 27-yard pass for the Cardinals’ third TD in the second quarter. De La Cruz meanwhile had 20 clear yards in front of him after catching Bridgewater’s pass for a 40-yard touchdown in finishing with team and career highs of 116 yards on four catches. Only Clark faced Ohio coverage before diving for his 25-yard score late in the third quarter.

Backup Will Gardner followed Bridgewater in the fourth but didn’t miss a beat, hitting De La Cruz for 30-yard touchdown for a 49-7 lead.

Louisville had hiccups such as four false starts and a face mask penalty in the first quarter. A pass interference penalty late in the third quarter helped Ohio break the shutout as Ryan Boykin scored from 10 yards.

But those were the only mistakes on a day that the Cardinals cruised.

“They were hitting on all cylinders today,” Solich said. “Bridgewater was precision-perfect on a lot of throws. At times, we made it a little easier than we should have made it for them as far as leaving receivers wide open. Still, their passing attack obviously was a great passing attack.”