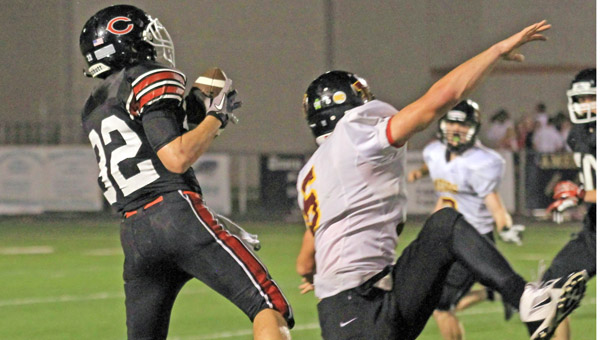 COAL GROVE — If you think last week was tough, it doesn’t get any easier for the Coal Grove Hornets.

After a wild 46-44 opening game loss to Meigs, the Hornets must go on the road and play the Wheelersburg Pirates who rolled to a 49-12 win over the Ironton Fighting Tigers in their season opener.

“We have to force them to do things they don’t want to do. If we do that, we have a chance. But that’s easier said than done,” said Hornets’ coach Dave Lucas.

Pirates’ quarterback Eddie Miller was 11-of-15 passing for 212 yards and four touchdowns. He also ran seven times for 48 yards and a score.

But Lucas said Wheelersburg is far from a one-man team. He said they have plenty of good skill players.

Wide receiver Dylan Miller had five catches for 119 yards and two touchdowns including a 72-yarder.

“Miller is a good athlete. We know that going in,” said Lucas. “They’re very balance. You’ve got to pay attention to their other running back and their skilled players.”

Coal Grove rolled up 574 yards of offense last week only to lose in the final 1:41 of the game.

Lucas said the Hornets will need a similar offensive effort against the Pirates.

“We feel like if we execute we can play a competitive game. What it comes down to is if we can block and tackle,” said Lucas.

The Hornets aren’t going to look back at last week’s heartbreaking loss.

“It came down to momentum shift. We made some mistakes early and we had chances, but we didn’t capitalize. We needed to make a play or a stop and we didn’t. And they’re pretty good,” said Lucas.

Meigs (1-0) at Fairland (1-0) Are you ready for some offense? Both teams put up some big offensive numbers and... read more