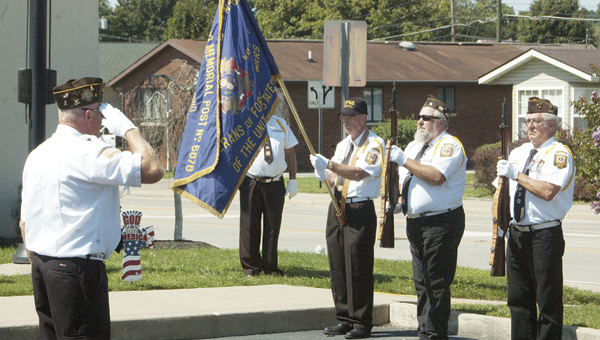 Members of Veterans of Foreign Wars Post 6878, Proctorville, stand attention as Taps is played during the 9/11 ceremony at WesBanco in Proctorville on Saturday.

PROCTORVILLE — Gunshots rang out in the parking lot of WesBanco in Proctorville Saturday, but there were no crimes committed.

Members of the Proctorville VFW Post 6878 fired three shots from rifles while standing in formation as part of a ceremony remembering the terrorist attacks of 9/11.

WesBanco started the event in 2009 and organizers say it continues to grow.

“We are in our fifth year of doing this,” Devinh Gibson, personal baker at WesBanco, said. “We started this to not only remember 9/11, but to thank all of our men and women who serve and have served.”

VFW Post 6878 members raised the American flag before the start of a community picnic, which featured pulled pork provided by Hog Heaven. All American Party Rentals provided an inflatable for the kids and attendees enjoyed games of corn hole.

“Each year we get more and more people wanting to get involved,” Gibson said. “We have people in the community who ask to be involved, they want to do whatever they can for this wonderful event.”

Grade school students Emma Ward and Alexander Miller led the crowd in the Pledge of Allegiance and as people were lining up to eat, Batman showed up.

John Buckland, of Huntington, W.Va., portrays Batman. He, Batgirl and Captain America were there with a message for children.

“It’s up to us to set a good example for kids,” he told adults. “They are our little heroes.”

Buckland served as a firefighter in the Army and is a veteran of Operation Iraqi Freedom.

Ripe for the picking

A community service worker loads a crate of corn into the back of a pickup truck. The corn will be... read more