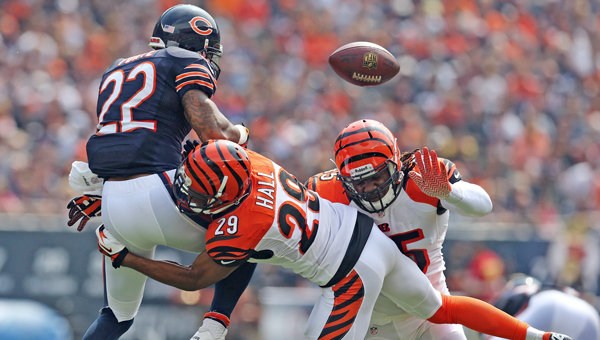 CHICAGO (AP) — The Cincinnati Bengals lost their lead, their cool and the game.

They’ll have to do better if they want to live up to the lofty preseason expectations.

Andy Dalton threw two interceptions and Rey Maualuga got called for a penalty near the end to wipe out any chance at a comeback, sending the Bengals to a 24-21 season-opening loss to the Chicago Bears after blowing an 11-point lead on Sunday.

“We had our chances,” Dalton said. “We had the lead. All we had to do is score one more time and our chances of winning the game would have increased a whole lot. But we had turnovers and it was hard to get it done.”

Jay Cutler passed to Brandon Marshall for the go-ahead touchdown in the fourth quarter, helping the Bears give Marc Trestman a victory in his first game as an NFL head coach.

Dalton threw for 282 yards with two touchdowns and two interceptions. A.J. Green had 162 yards receiving and two touchdowns, including a 45-yarder.

But it was a disappointing opener for a team coming off back-to-back playoff appearances for the first time since 1981 and 1982.

“They didn’t stop us one time,” Green said. “They didn’t really stop us on offense. We were doing whatever we wanted. The biggest thing we had was turnovers.”

They were up 11 in the third quarter, only to have Chicago rally down the stretch.

The Bengals would have had one last chance to win or tie it, but Maualuga committed a personal foul away from the play when Cincinnati stopped Michael Bush after a short gain on third-and-6 at the Cincinnati 45 with a little over a minute left.

The unnecessary roughness penalty kept the drive going and allowed Cutler to take a knee twice, ending the game.

“We had a lot of guys unfortunately lose composure today,” Bengals coach Marvin Lewis said. “We can’t do that.”

For the Bears, it wasn’t quite the performance they were looking for after making some big changes in the offseason.

But they made the most of a handful of big plays by Cutler and repeated mistakes by the Bengals.

Cutler threw for 242 yards behind a line with four new starters. Marshall had eight catches for 104 yards, and the offense pulled it out after struggling most of the way.

The Bengals led by 11 in the third quarter and were up 21-17 early in the fourth when Tim Jennings jarred the ball from Mohamed Sanu following a reception and made the recovery.

Chicago took over at its 19 and got an 8-yard run from Matt Forte on fourth-and-inches at the Bengals 27 to keep the drive going.

Cutler then found Marshall in the front corner of the end zone for a 19-yard touchdown with 7:58 left.

The Bears made big changes in the offseason, parting with star linebacker Brian Urlacher and hiring Trestman to replace the fired Lovie Smith with the idea that he could spark the offense and lead them to the playoffs after missing out five of the past six years.

The offense seemed stuck most of the afternoon but came through in the end, with Cutler completing 21 of 33 passes. He also had two touchdowns to go with an interception.

And Robbie Gould set a franchise record with a 58-yard field goal at the end of the first half following some questionable clock management by Cincinnati.

“I think it tested us and our backbone because it didn’t go the way we wanted it to go, certainly, in the first half,” said Trestman, who coached the CFL’s Montreal Alouettes the past five seasons.

“But the guys hung in there together, at halftime pulled themselves together and the team went out and played every play and were able to come out on top.”

Up 14-10 at the half, the Bengals started the third quarter with an 80-yard scoring drive.

Tillman got called for interference on a deep pass to Green that put the ball on the 1, and BenJarvus Green-Ellis plowed in from the 5, making it 21-10.

But the Bears responded with an 80-yard drive that ended with Forte running it in from the 1 to get them back within four.

Vontaze Burfict intercepted Cutler near midfield early in the fourth quarter, taking a shot to the right knee from Chicago’s Kyle Adams.

Cincinnati took over at the Bears 40, but Sanu’s fumble at the 17 led to a big swing.

And Marshall couldn’t believe he was one on one with Reggie Nelson on the go-ahead touchdown.

“I didn’t understand it. You know?” Marshall said. “Fourth quarter, put a safety on me one on one? You can only ask for that and dream about that.”

NOTES: Burfict said his knee was bruised. … Green hurt a finger at one point, but Lewis said he’s fine. … Bengals LT Andrew Whitworth, recovering from offseason surgery on his left knee, was inactive. … Gould held the previous Bears record with a 57-yard field goal against Denver on Dec. 11, 2011. … Trestman joined Hall of Famer George Halas (1920), Neill Armstrong (1978) and Dick Jauron (1999) as the only coaches to win their Bears debut.