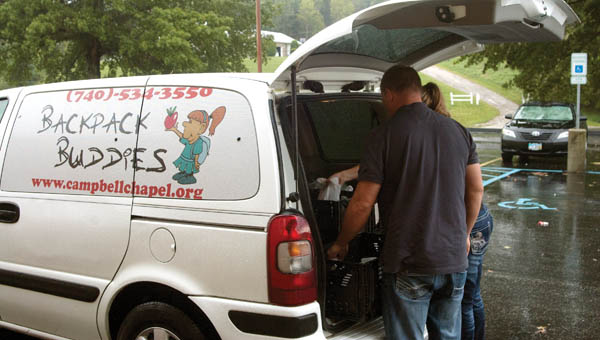 Jodie and Jason Hunt unload the Backpack Buddies van at the Rock Hill School District Thursday. Each week, food is brought in for children in need to take home over the weekend.

Less than a year ago, Campbell Chapel Church in Ironton started a program to make sure elementary school children at Rock Hill didn’t go hungry over the weekends.

Called Backpack Buddies, the effort provided kid-friendly foods to about 40 children in the school.

Coming up on its one year anniversary, Backpack Buddies is now helping nearly quadruple the number of children and has expanded to six school buildings across three districts.

And while being able to help more children is a good thing, organizers say they need help filling the orders to make sure no child goes hungry.

“It’s unreal,” Jodie Hunt, program coordinator, said. “I had no idea that we would grow as fast as it did. I knew there were kids in the community that were in need that we could help. But I never realized it would grow to this extreme so quick.”

Hunt said many of the children have told their teachers they don’t know where their next meals would come from.

Backpack Buddies is having a food drive beginning Monday to help stock its pantry to feed the more than 140 children in the Rock Hill school district along with its developmental disabilities program, Ironton Middle School and Dawson-Bryant Elementary School who use the program.

Hunt also said other schools have expressed interest in the program.

The food drive will run through Friday with various drop-off barrels at various locations around Ironton, including Pick N Save, Bartram and Sons and Foodfair in Coal Grove.

“If you are out and about and you buy groceries, they are going to have our items there at the purchase counter,” Hunt said. “The ravioli, the mac and cheese, pop tarts. You can say you want to purchase one and they are going to fill our barrels for us.”

All the schools that participate in the program are also collecting food.

The food drive will culminate with a community harvest day from noon to 4 p.m. Saturday at the church.

There will be inflatables, free hot dogs and drinks and a variety of county programs set up as vendors, such as the Ironton Health Department, Lawrence County Sheriff’s Office and Head Start.

Lowes of Russell, Ky., has donated a grill and accessories to be auction off and volunteers will have woodcrafts for the children. Other local businesses have also donated, including Heiner’s, Wendy’s, BC Tool Rental, Wesbanco and others.

“It’s been overwhelmingly surprising of how many people want to help us and offered before we’ve even asked,” Hunt said.

Fall decorations for the harvest day will also be sold after the event.

Admission to the harvest day is either a monetary donation to the Backpack Buddies program or food items.