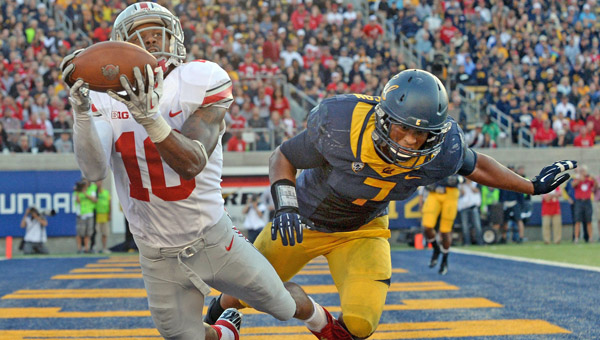 BERKELEY, Calif. (AP) — Powerful runs through the defense, deep passes down the field and playmakers excelling with the ball in space.

That is just the type of offense coach Urban Meyer has wanted since arriving at Ohio State last season. The fact that the Buckeyes did it without injured quarterback Braxton Miller and suspended running back Carlos Hyde was even more impressive.

“That was fun to watch,” Meyer said. “The thing you had is you had some guys making plays down the field. We couldn’t have done this a year ago.”

Ohio State (3-0) gained 608 yards of offense in its most prolific performance in three years and had remarkable balance with Guiton throwing for 276 yards and Hall leading a rushing attack that gained 332.

This marked just the third time in the last 17 seasons that Ohio State topped 275 yards on the ground and in the air in the same game. The Buckeyes did it by running a fast-paced, no-huddle offense for much of the game that kept Cal’s overmatched defense on its toes.

“That’s who we want to be, a very up-tempo team,” Meyer said.

It’s a big difference from the offense a year ago when the Buckeyes went 12-0 with Miller shouldering most of the load. He led the team in rushing with 1,271 yards, threw for 2,039 yards more and accounted for 28 touchdowns.

Now the Buckeyes have a dangerous backfield led by Hall and speedy freshman Dontre Wilson and strong receiving threats in Devin Smith and Corey Brown.

“Last year our breakaway talent was only No. 5 (Miller),” Meyer said. “Now there’s some other guys who have a little bit of break away and (Wilson) is the one guy off the top of my head. Jordan did a nice job. To have a horizontal threat in this offense other than your quarterback is a must.”

Smith had three catches for 149 yards, including a 90-yard touchdown on Ohio State’s second play to set a school record for the longest play from scrimmage and a 47-yard score. Brown added five catches for 35 yards and one touchdown.

Wilson added another element of speed with 107 yards on eight offensive touches.

“I see myself as a big-time playmaker as a game-changer,” Wilson said. “Every time I get in I tell myself that. Without having Braxton, we lose the treat of running by the QB. They bring me in to stretch it out and just make a big play when the time is needed. Every time I get the ball I’m trying to show the coached what I can do.”

The Buckeyes offense could be even tougher next week against Florida A&M in a final tuneup before a tough opening stretch of the Big Ten season against No. 24 Wisconsin and No. 18 Northwestern the following two weeks.

Miller sat out the Cal game with a sprained left knee sustained in the first quarter the previous week against San Diego State but is expected back soon. Although Meyer said Guiton earned himself playing time by going 21 for 32 and running for 92 yards.

Hyde, who ran for 970 yards and 16 touchdowns last season, was suspended for the first three games of the season after his name came up in an alleged assault against a female at a Columbus bar in July.

“There’s a lot of weapons you have to worry about and getting Carlos back just adds to the mixture,” Guiton said. “I can’t wait to see him go this week.”