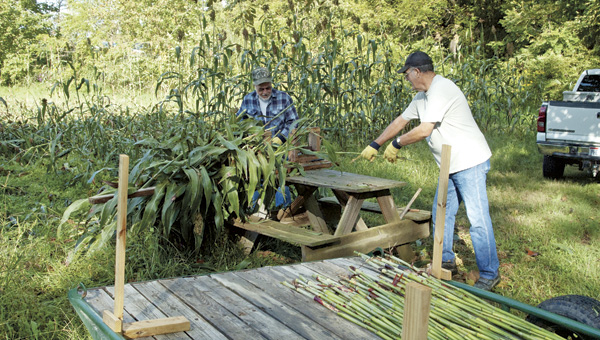 SOUTH POINT — As the temperature drops and the leaves change colors heading into fall, it can only mean one thing in southern Ohio — Sorghum.

The Willow Creek Sorghum and Bluegrass Festival will begin at noon on Saturday, Sept. 21, in South Point.

“If people have any trouble finding it, just follow the signs for the highway patrol office,” Bill Enyart, festival co-organizer said. “We’ll have signs up to make it easier for people, too.”

This year, Enyart and co-organizer Ivan Smith have added Yesterday’s Gospel to the music lineup, marking the first time a gospel group has performed at the event, which is now in its 15th year. Four bluegrass bands will also perform.

“We always have between 300 and 500 people here, depending on the weather,” Enyart said. “It’s usually a full house.”

Between now and Saturday, Enyart and Smith will be busy clearing the sugar cane from the field adjacent to South Point High School where the festival is held. The canes are taken to a mill and processed and becomes the sorghum for which the festival is named.

The Lincoln County Cloggers will be back this year as well as Stiltner’s Honey from Fort Gay, W.Va., and the Proctorville Order of the Eastern Star will make apple butter and Dan Fulks will have his bean kettle and corn bread.