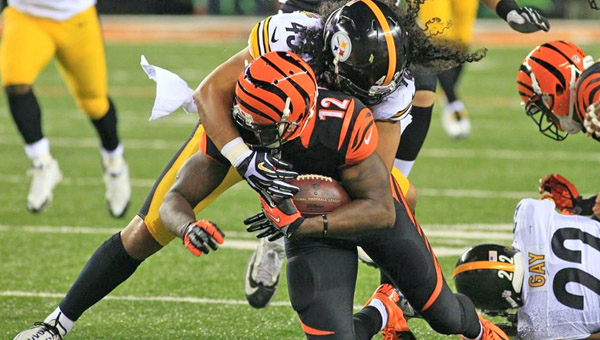 One of the NFL’s top defenses had given him a big opening.

The elusive rookie turned the catch into a 27-yard touchdown on Monday night, one of his two scores that made all the difference in the Cincinnati Bengals’ 20-10 victory over the struggling Pittsburgh Steelers.

He wasn’t the only rookie putting their new imprint on an old rivalry. Top pick Tyler Eifert made a 61-yard catch that set up Bernard’s 7-yard run for his first NFL touchdown. Together, they gave a preview of what the Bengals (1-1) could become with two new pass catchers in the offense.

“Gio’s done a good job,” Dalton said. “We drafted him to be versatile, move around the backfield and make big plays. And that’s exactly what we’ve gotten out him.”

The Bengals piled up 407 yards on one of the NFL’s toughest defenses, holding the ball for more than 35 minutes.

The Steelers fell to 0-2 for the first time since 2002, done in by another game of self-destruction on offense. Pittsburgh had two turnovers in scoring range and couldn’t hold the ball long enough to give their defense a breather, failing to get a first down on seven of their 12 possessions.

“There’s not a lot of positives going on right now,” said Ben Roethlisberger, who was 20 of 37 for 251 yards with one touchdown and a deflected interception. “We can’t start doubting each other. Right now, there’s a general feeling of being upset.”

It was a chance for the Bengals to show they’ve supplanted the Steelers in the AFC North. They beat Pittsburgh 13-10 at Heinz Field last December to reach the playoffs, and now have moved ahead of them again with a rare Monday night win.

Cincinnati is 10-20 in Monday night games.

“This doesn’t define anything until you look back at the end of the year,” coach Marvin Lewis said.

The Bengals put the ball in the Dalton’s hands in the first half, letting him pass away while they all but abandoned the run against one of the NFL’s top defenses. Dalton had an up-and-down game, finishing 25 of 45 for 280 yards.

Eifert got open between cornerback Ike Taylor and safety Ryan Clark for his 61-yard catch. Bernard finished the long drive with a 7-yard run, his first touchdown in the NFL, for the early lead.

The Steelers needed to get their offense moving after a horrid opener. They ran for only 32 yards and Roethlisberger was sacked five times during a 16-9 home loss to Tennessee. Worse, the Steelers lost Pro Bowl center Maurkice Pouncey for the rest of the season with a torn knee ligament. Fernando Velasco, signed a week earlier, started in his place Monday.

They weren’t significantly better in Cincinnati.

Roethlisberger got Pittsburgh’s offense moving in spurts. He completed all five of his passes on a touchdown drive that pulled the Steelers into a 10-all tie at halftime, including completions of 19 and 43 yards to Emmanuel Sanders.

Shaun Suisham kicked a 44-yard field goal, and the Steelers had a chance to add to the lead in the first half. But another mistake — and they’ve had a lot of those already — provided the game’s first turning point.

Pinned at their 3-yard line after a punt, the Steelers drove into scoring position. Roethlisberger completed a 34-yard pass to tight end David Paulson, who fumbled the ball as he was tackled. Adam “Pacman” Jones forced the fumble and recovered it at the Cincinnati 13-yard line.

Another of Roethlisberger’s passes went off Jerricho Cotchery’s hands and was picked off at the Bengals 13-yard line in the fourth quarter, essentially sealing it.

The most intriguing question: Could Steeler-turned-Bengal James Harrison leave a mark on Pittsburgh’s mess of an offense?

Nope. He didn’t have a sack or a tackle.

Notes: The Bengals rushed for 127 yards, with BenJarvus Green-Ellis getting 75 on 22 carries. Bernard ran eight times for 38 yards. … The Bengals have consecutive wins over the Steelers for the first time since 2009. … Roethlisberger was sacked twice by a defense that failed to get one in Chicago.

HOUSTON (AP) — Dusty Baker had his fingers crossed that Johnny Cueto would be OK in his return from a... read more