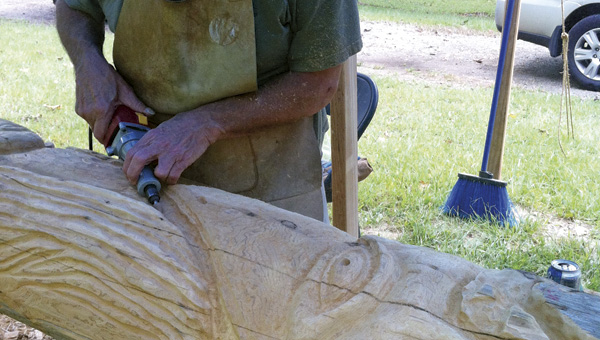 Woodworker Charlie Cook carves Native American symbols into a 23-foot long pole. The totem pole will be erected on Saturday, Sept. 21, as part of the Camp Oyo Staff and Alumni Association Reunion and Open House.

The 19th annual Camp Oyo Staff and Alumni Association Reunion and Open House is this Saturday and several dedications are planned during the event.

Established in 1926, Boy Scouts from Lawrence County as well as other communities in Ohio and Kentucky have used the camp since it opened.

Beginning at 1 p.m., a public tour of the camp will feature Boy Scout skills demonstrations and memorabilia displays before a free meal is served in the camp’s dining hall at 4 p.m. with the dedication of a historical marker and other events to follow.

Shaffer said an overall decline in Scouting has resulted in lower attendance at the camp, but the camp has survived.

“Camp Oyo was the first camp to build cabins to be used for overnight camping,” Shaffer said. “There is a good deal of effort involved in keeping up these cabins.”

Built during the Depression, the camp has seven chestnut log cabins that are maintained by a group of Ironton men who visit the camp once a month.

The historical marker will be erected in memory of Lt. Gary Nolan Shy, a Camp Oyo scout who was killed in Vietnam in 1968. Rep. Terry Johnson and Sen. Joe Uecker – both former scouts – will officiate the dedication.

To honor the camp’s long tradition, a totem pole will be placed on the property during the reunion.

Charlie Cook, a retired salesman, carved the totem from a 23-foot long piece of a utility pole donated by AEP Ohio.

Cook volunteered to carve the pole, which is decorated with Native American symbols.

“It took me around 60 hours and I used power equipment,” Cook said, admitting this was his first attempt at a totem pole. “This is the largest piece I have ever done. I usually carve with a hammer and chisel.”

Carving has been Cook’s hobby since taking a woodworking class in the late 1980s. He normally does small pieces such as jewelry, angels, Santa Claus and the cane carried by the grand marshal in the Ironton-Lawrence County Memorial Day Parade.

A bronze plate will be placed on the pole in honor of Tom Lightenheimer, the founder of the alumni association who died last year.

Along with the dedications and food, singing, an awards presentation and a closing flag ceremony will also take place.

Camp Oyo is located on State Route 125 near Friendship, in Scioto County.