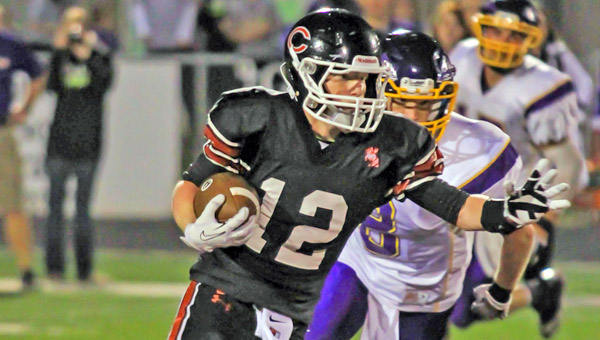 COAL GROVE — The schedule just doesn’t get any easier for the Coal Grove Hornets.

After three tough games to start the season, the winless Hornets are bracing for the Raceland Rams who are 3-1.

So far Coal Grove has played Meigs, Wheelersburg and Lucasville Valley who have a combined 8-1 record. Raceland’s only loss was 35-34 in overtime at Ashland in a game the Rams led by 14 points on two occasions and missed two scoring opportunities on turnovers.

“This is one of the better Raceland teams I’ve seen,” said Hornets’ coach Dave Lucas. “We’ve played two good games and one bad game. We’ll need to play a good game this week.”

The Rams’ offense is led by 6-foot, 180-pound senior running back Daylin Beach — he visited Cincinnati last week — who ran for more than 1,000 yards last season.

“They have good size and two real good athletes. Beach is a nice running back and (Messer) is a real good receiver,” said Lucas. “They’re big in the middle and quick on the outside. We’ll have to move them to have any success.”

Lucas said a key for the Hornets will be limiting or eliminating their turnovers.

“We have to hang onto the ball. We can’t turn the ball over and win. We’ve stopped ourselves. That’s experience. We’ve got a lot of new guys at the skilled positions. These guys are feeling their way around,” said Lucas.

“We’re going to do the same thing we’ve been doing, we’re just going to try to do it better.”

Fairland (2-0) at Gallipolis (1-1) This game will be determined by which team can come up with the most defensive... read more