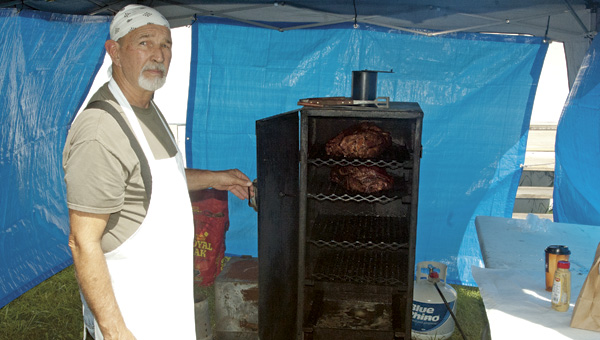 Robin Russell shows two 10-pound chunks of pork being smoked on a custom-made stoker he made in his garage. Stoker Bar-B-Que, inside Tipton’s Mini Mart on State Route 93, has pulled pork and barbeque pulled pork sandwiches and sides prepared on site.

Robin Russell loves to smoke pork. He was doing it so often, he decided to build himself a stoker, a device used to prepare what has become his signature offering

“I started out with just one of the little dome grills, but with those the heat didn’t last and the water dried up too fast,” he said. “I would fill the drip pan with water and before long the water was gone. So I just decided to build one.”

That was two years ago, Russell said, and after spending time traveling around with his custom-built stoker to parties and private functions, he said he asked himself the inevitable question: “Why can’t this be a business?” A business it now is.

“We cooked in the parking lot here at Tipton’s last year and Missy Kellogg, the owner, mentioned something about doing it full time in the kitchen here,” Russell said. “She mentioned the need for fresh food in this area and after thinking about it for a while, here we are.”

“We” refers to Russell and Stoker Bar-B-Que co-owner Susan McComas who after just shy of a week in business, says their food is already getting rave reviews.

“People are coming in, and people are coming back,” she said. “One man was in the parking lot and I told him to try the pulled pork before he left. He tried it, and in a few minutes was back here with his wife to get more.”

Russell and McComas are both Lawrence County natives who fully believe in their product. Hours are spent preparing the sauces and sides — all made from scratch — while the pork, usually between 16 and 20 pounds, is smoked between four and six hours at 200 degrees. A chunk of apple wood with the bark removed is added to the charcoal to enhance the pork’s flavor.

“Everything is not only made from scratch, it’s healthy,” McComas said. McComas credited Russell’s mother, Juanita, who worked in food service for years, for encouraging this venture, which the co-owners say is destined to grow.

“We hope to expand to offer breakfast like a pulled pork, egg and cheese sandwich or biscuit,” McComas said. “Ribs and pork loins are something we plan to offer in the future as well.”

The homemade moniker attached to the food extends to the accoutrement, such as special made rubs and sauces.

“We have custom rubs we use on the meat and let them marinate for a long time, we do a lot of prep,” McComas said. “We will soon offer a custom sausage mustard sauce and a sweet and hot barbeque sauce to go along with our current sauces.”

The reason for making ingredients from scratch is twofold for Russell and McComas. It not only adds to the flavor and aligns with their “fresh food” beliefs, but it is also healthier.

“We don’t put any high fructose corn syrup in our sauce,” Russell said.

“Our meat is nearly fat free because all the fat drips out into the pan.”

As with many small-business owners, Stoker Bar-B-Que is a labor of love for Russell and McComas.

“I am able to do what I want to do and watch people smile,” McComas said. “I get to satisfy my love of cooking, hospitality and serving people. So far I am having a great time doing this.”

The location of Tipton’s, at 6366 State Route 93, is ideal for Stoker Bar-B-Que according to its owners because of the high traffic.

“We are right here near Rock Hill Schools,” McComas said. “We are also right down the road from Lake Vesuvius so if people are having a picnic or a birthday party and they want fresh food, we are here.”

Right now Stoker is carryout only, and orders can be made by phone from 10:30 a.m. to 5 p.m. or walk-in. After 5 p.m., those seeking Stoker Bar-B-Que can purchase a sandwich kit at Tipton’s and cole slaw and potato salad are available in bulk as well.