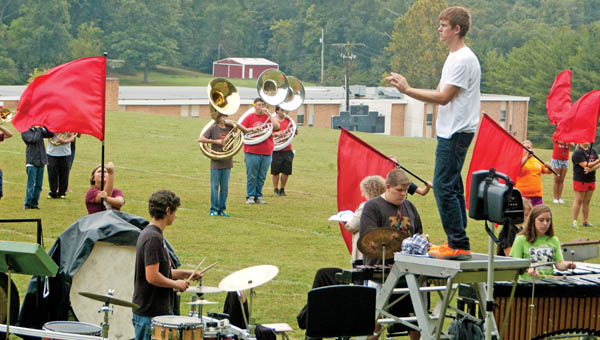 Members of the Rock Hill Marching Band were spread across the field behind the middle school as band director Nick Basham stood atop a wooden platform giving direction through a loudspeaker.

“Let’s start over, percussion section was a bit too fast,” Basham said. “From the beginning.”

Although not likely out of the ordinary for band practice at Rock Hill, this practice has a bit more meaning to Basham and the band members.

After a 13-year hiatus, Saturday marks the return of the Rock Hill Band Invitational, a competition the band and its director are anxiously awaiting.

“We have applied to the Ohio Music Education Association (OMEA) for the past four years and we finally got it back,” Basham said. “Now that we have it, as long as we want it we will have it.”

Band director changes, a decline in the number of band members and the inability to get judges are some of the factors that led to dissolution of the competition, Basham said.

“Judges have to be OMEA certified,” he said, “and the State of Ohio only allows a certain number of competitions each year. We fought hard to get this back and we are excited and ready.”

Rock Hill’s 60-member band will face some tough competition as local high school bands as well as bands from Cincinnati, Columbus and Huntington will participate.

The caliber of competition hasn’t raddled the Redmen.

“I’m excited for it,” Chandler Haskins, a senior who has been in band for five years and is now in his third year as field commander, said. “Everyone in our band does their best in whatever we do. We will be bringing everything. It’s never good not to do well in your own competition.”

Bands will vie for placement in class C, B, A and AA as well as first and second-place awards for both percussion and color guard. A grand champion and reserve grand champion will also be named. The band with the most supporters in attendance will receive the spirit award.

Senior Allison Schwab has played clarinet for seven years and has been in marching band for five.

“I can’t wait to see how we do,” she said. “We have practiced a lot and I think we are prepared.”

Schwab said the band usually practices for three hours a day five days a week and participated in a three-week long band camp back in July.

Senior Nate Tipton plays the bass drum and he, like Haskins and Schwab, is anxious to compete.

“I expect us to do well and show that we are worthy of having our own competition,” Tipton said. “We need to show everybody that we mean business.”

The Rock Hill Band Invitational begins at 4 p.m. Saturday at the high school.

Robin Russell shows two 10-pound chunks of pork being smoked on a custom-made stoker he made in his garage. Stoker... read more