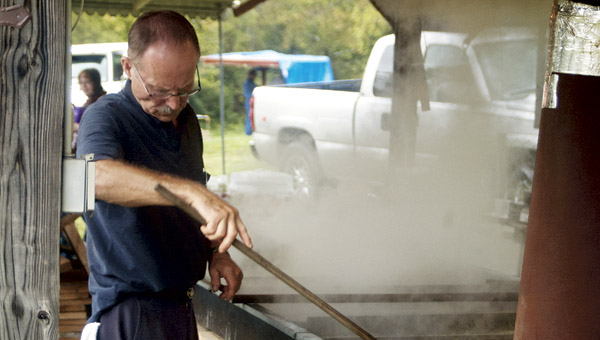 Lowell Moon deliberately stirs and monitors what will become sorghum during the 15th annual Willow Creek Sorghum and Bluegrass Festival in South Point.

SOUTH POINT — It was a soggy Saturday for Sorghum in South Point. Rain may have decreased attendance, but it didn’t damper people’s spirits.

“I’m thankful for who we’ve got here,” Bill Enyart, who co-organizes the event with Ivan Smith, said. “I knew if it rained it would hold people back some.”

Regardless of the rain, the music was playing and the sorghum was flowing. Those who showed up at the event could still experience all the things that have made the Willow Creek Sorghum and Bluegrass Festival an early fall tradition for so many.

Homemade apple butter made by the Proctorville Order of the Eastern Star was brewing. Lowell Moon and his daughter, Barbi Moon Theado, were busy stirring what would be become the food for which the festival is named.

“We have made a bunch of sorghum today and we have more that was brought up from Kentucky,” Enyart said.

Hot dogs were for sale as well as beans and corn bread. Stiltner’s Honey, from Ft. Gay, W.Va., and the Lincoln County Cloggers were some other festival staples at the event.

But, Enyart admits, it’s all about the sorghum, which during wartime in year’s past has been difficult to come by because sugar was rationed. Sorghum is also widely used as the ingredient that holds together popcorn balls.

“The way I like to eat sorghum is to warm it up until it foams again, add butter and pour it over biscuits,” Enyart said. “Someone told me to drag a cathead biscuit through sorghum, and if it don’t tear it apart, something’s wrong.”