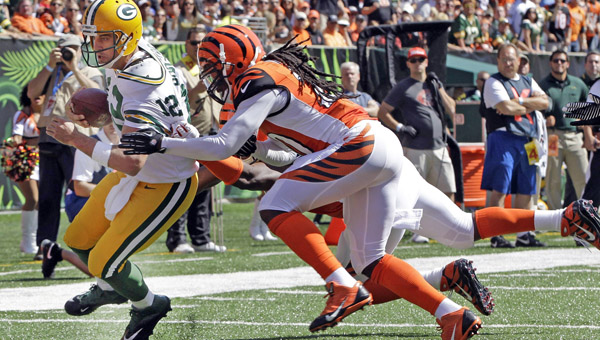 CINCINNATI (AP) — A game full of weirdness came down to the final flub, one that bounced right into Terence Newman’s arms.

The cornerback returned a fumble 58 yards for a touchdown with 3:47 left on Sunday, rallying the Cincinnati Bengals to a 34-30 victory over Green Bay in a game of wild momentum swings set up by nonstop turnovers.

“We learned some valuable lessons and survived one today that you don’t survive very often,” coach Marvin Lewis said.

The lesson? Just hold onto the ball.

Each team gave it away four times. Each team returned a fumble for a touchdown — M.D. Jennings ran one back for Green Bay (1-2). The Bengals blew a 14-point lead, and the Packers let a 16-point lead get away in the second half. Green Bay scored 30 consecutive points and lost.

And no, the weather wasn’t a factor. Nobody could blame the cool, sunny afternoon for all the oddities.

“There’s been a lot of crazy games since I’ve been here,” seventh-year cornerback Leon Hall said. “But that one’s up there. Top three.”

The Bengals (2-1) finished it off when Michael Johnson batted down Aaron Rodgers’ fourth-down pass at the Cincinnati 20-yard line with 1:21 left, ending a subpar showing for the quarterback.

It was the first time in 14 years that a team won after allowing an opponent to score 30 consecutive points in a game.

“We didn’t flinch,” safety Reggie Nelson said. “You expect a great team like that to score.”

The second-half comeback completed an exhilarating week at Paul Brown Stadium for the Bengals, who beat AFC North rival Pittsburgh 20-10 on Monday night with an impressive defensive game.

The defense made the difference again against Rodgers and Green Bay’s high-powered but injury-depleted offense. Rodgers was 26 of 43 for 244 yards with a touchdown, but was sacked four times and threw two interceptions.

“It was a frustrating game,” Rodgers said. “We spot ‘em 14, score 30 in a row and they get 20. I played poorly and the defense played well enough for us to win.”

The Packers were running on empty at the end.

Green Bay lost tight end Jermichael Finley to a concussion and ran out of running backs. Eddie Lacy was inactive with a concussion, James Starks hurt a knee in the first half, and rookie Johnathan Franklin ran for 103 yards and a touchdown before limping off at the start of the final series.

The Bengals were missing cornerback Dre Kirkpatrick, sidelined with a hamstring injury, but got plenty of pressure on Rodgers and made the deciding turnover.

Trying to put the game away, Green Bay went for it on fourth-and-1 at the Cincinnati 30-yard line. Franklin was stripped of the ball at the line, Nelson picked it up and started to run but fumbled — of course! — and Newman scooped it up and went the rest of the way.

“I saw Reggie pick it up and I was trying to get a block and somebody was trying to tackle him,” Newman said. “I was screaming: Pitch it! Pitch it! Next thing I know, I saw the ball pop loose. It took a nice little bounce where I could just grab it and run.”

When he reached the end zone, Newman jumped into the stands in celebration.

“I know they were a big Lambeau leap team, so I wanted to jump up there,” Newman said. “I saw a bunch of fans over there. I don’t know what came over me. I’ll never do that again.”

Cincinnati scored two touchdowns within a 12-second span in the first quarter, aided by a fumble on a kickoff, but wound up having to play catch-up as its offense bogged down.

Andy Dalton was 20 of 28 for 235 yards with two touchdowns, an interception and a fumble that Jennings returned 24 yards for a touchdown in the second quarter, sparking Green Bay’s comeback.

With Green Bay missing linebacker Clay Matthews to a hamstring injury, Dalton threw touchdown passes of 20 yards to A.J. Green and 11 yards to Marvin Jones, cutting the deficit to 30-27.

Notes: The last time a team won a game after giving up 30 straight points was Sept. 12, 1999, when Dallas rallied to beat Washington 41-35 in overtime after the Redskins scored 32 unanswered points. … Starks ran for 132 yards in a 38-20 win at Washington last week, ending Green Bay’s streak of 45 games without a 100-yard rusher. Now, they have back-to-back games with a 100-yard rusher. … The Packers had only 16 turnovers last season, second-fewest in the NFL.