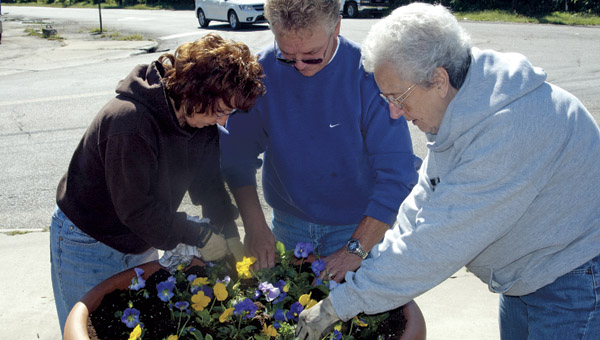 COAL GROVE — Making sure the village of Coal Grove has the right seasonal look for visitors and residents alike is one of the goals of the Coal Grove Betterment Club.

So that’s why on Monday club members, Vicki McDaniel, Juanita Markel and Mayor Larry McDaniel were bringing in the fall season by planting in the oversized terra cotta pots that are placed through the village purple, yellow and apricot pansies.

In fact, their goal was to put out that day all of the 30 flats of flowers ordered to beautify the village. This is the fourth year for the club to create the autumnal decorations. Next week club members will put take the locations of three of the flower pots and add pumpkins and fodder shocks to create large displays.

Those will be at the four-way stop on the upper end of the village, the three-way stop at Marion Pike and South Third Street and at Giovanni’s.

“Those are the three big ones,” Vickie McDaniel said. “And there will be 22 fodder shocks. Then we start decorating for Christmas at the park.”

To get ready for Christmas volunteers take about six weeks to put up the thousands of lights and decorations at the Paul Porter Park.

“I’ve ordered more bulbs and there will be some new scenes,” Vickie McDaniel said.

They include teddy bears and reindeer.

Each December the park attracts visitors from the Tri-State to view the holiday scenes. Two years ago vandals stole the Baby Jesus from the Nativity scene. But when the theft was reported, the village received two anonymous donations to replace the statue.

“Last year was the first time for the new baby,” Vickie McDaniel said.

Suspects to be arraigned Friday    SOUTH POINT — A months-long investigation resulted in the arrest of two South Point... read more