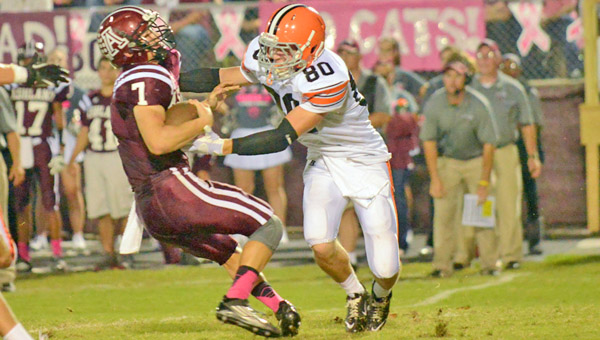 Ironton coach Mark Vass knows a lot about the Portsmouth Trojans. He sees it in his own team.

Last year, the Trojans were a young team with some good skilled players. They took their lumps as they struggled through a 1-9 season.

“I see a lot of them last year in what we’re going through this year. They had a lot of new players and a lot of inexperienced players,” said Vass.

“They’ve got most of their line back and they’re better up front. And we know they have good skilled players.”

Eight players return on offense for Portsmouth and Vass said the Trojans are much improved thanks to the experience they obtained playing last season.

“They’re pretty good,” said Vass as he prepares for Friday’s home game against the Trojans.

Portsmouth is just 1-3, but they lost 28-19 in their opener to a veteran and unbeaten Lucasville Valley. The Trojans beat Portsmouth West 35-21, lost to unbeaten Wheelersburg 42-14 in a game that was 21-14 at the half, and lost 34-6 to unbeaten Minford last week as two turnovers led to Falcon touchdowns.

“Their record is deceptive. They’ve lost to three unbeaten teams and played well in those games,” said Vass.

Ironton won 61-34 last year, but the Fighting Tigers have only three starters back and they are coming off a 42-20 loss at Ashland last week. Ironton has been hampered the past two weeks by injuries to key players.

“Their quarterback is a three-year starter and he has a nice arm. (Charles) is good, hard runner who has speed and can break tackles,” said Vass. “They’ve got a lot of weapons on offense.”

Defensively the Trojans line up in a 5-3 alignment and like to play an attacking style.

The secondary has Oliver and Lattimore as the cornerbacks while Lisath the safety.

CINCINNATI (AP) — Mike Leake had one of those nights that happen to pitchers every so often. Bad timing for... read more