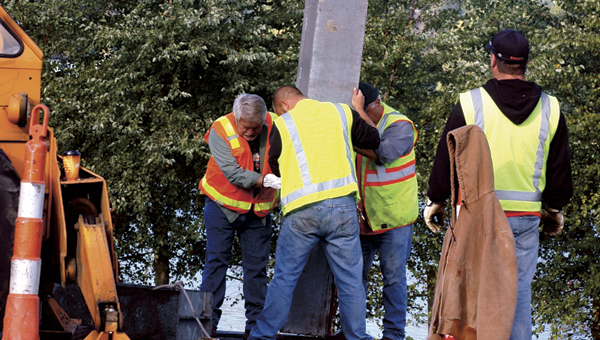 Ironton city workers work to place a steel beam into the ground at the Center Street floodgate Tuesday morning. The exercise to assemble to floodgate took about 9 hours and is mandated by the Army Corps of Engineers to be performed every three years.

As city workers labored to stack aluminum beams vertically between the three steel support beams on the Center Street floodgate on Tuesday, Francis Miller looked on from afar, snapping a few photos.

The 70-year-old Ironton native grew up on North Second Street, just a stone’s throw from the largest floodgate in the city.

“I used to watch them put up the floodgates every year when I was a kid,” Miller said.

That was before the Greenup Dam was built in 1960, the man recalled, and the river was more prone to flooding.

Miller said he couldn’t remember the Ohio River ever getting as high as the floodwall at Center Street during his lifetime, but said watching city workers practice placing the gates was somewhat reassuring.

Workers began at 6 a.m. Tuesday with the exercise that would determine if all pieces would fit into place in the event of a flood.

Per the Army Corps of Engineers, floodgate exercises are supposed to be performed every three years, while the city hasn’t performed any since 2005, Mike Pemberton, street and flood superintendent said.

The Center Street floodgate entry was also widened in 2003, and since then, the new parts of the gate were never fitted.

“It is sort of like buying a pair of shoes and not trying them on until you get home,” Pemberton said.

One of the steel vertical beams that holds the 88 pieces of aluminum into place would not fit in its opening in the ground.

The ill-fitting beam had to be modified on site with a grinder.

Despite the hiccup and a few problems with equipment, Pemberton said he was pleased with the mock gate closure. He also said modification notes were made to help the process move quicker in the future.

“The Corps of Engineers was pleased to see what we had done,” Pemberton said. “I think they left happy.”

Steve Spagna, the district levy safety program manager for the corps, said the gate closure was a learning experience for city workers and that he was pleased with their efforts as well.

“They have really done a lot over the year or two in addressing the maintenance deficiencies we’ve described,” Spagna said.

The entire mock closure was over by about 3 p.m., Pemberton said.

And while the mock closures are mandated by the corps, Pemberton said the work is not included in the flood department’s budget.

“We had to pay a little bit of overtime this evening for a few of the people and again, we haven’t budgeted for this type of thing,” Pemberton said. “We just have to keep an eye on our budget and if the budget allows us to, we might do another one this year. I don’t know. It’s just too early to tell yet.”

Pemberton also said he hopes the city will increase its floodwall levy. Currently, Ironton residents pay a half-mill flood levy, which brings in about $120,000 per year.

“The corps is asking us to do a lot more than we used to do, which is a good thing, but we just don’t have the money,” Pemberton said. “I’m hoping we can get council’s support to either put some kind of floodwall money together or raise our flood levy. We definitely need to keep our floodwall and all of our pumps and gate closures exercised. But that’s going to take council’s support to do this.”

SOUTH POINT — Beford South Point Ford has a new owner after its sale to the Glockner family car... read more